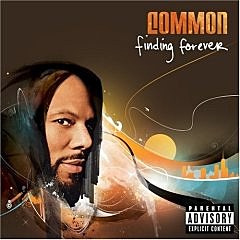 Common's new album Finding Forever is out this week. Tom Breihan doesn't even hate the cover. A video Common on Kimmel, plus some tour dates, below....

On Common's seventh album Finding Forever, the follow up to the Kanye West produced Be, Kanye, again, takes the bulk of production work with help from will.i.am on the sultry "I Want You" and the late great J Dilla on "So Far To Go," which also appeared on The Shining and features a surprise guest appearance by D'Angelo.