Ed really gets around....

When not singing backup for Feist on Conan O'Brien, or on stage at Town Hall, Edward Droste can be often be found wilding with Zach from Beirut (who has also been known to jump up and down with Ed as well).... 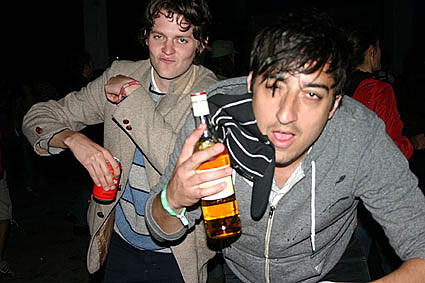 Previously Ed was also spotted having fun with Patrick Wolf at Sasquatch, and partying with CSS and Paris Hilton at Coachella (and without Paris in Brooklyn).

Feist plays Bonnaroo this weekend. Tickets are on sale for her show at McCarren Pool.