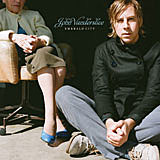 John Vanderslice is in the midst of a 'blog tour', and I'm proud to present to you here and now - the third stop on the tour. This is (track six on his new album 'Emerald City') "The Tower":

John Vanderslice and his band have performed and taped each song from his forthcoming Barsuk Records release Emerald City from his San Francisco based Tiny Telephone studio. These fine videos are to be enjoyed by the world via the magic of the interwebs. Video for each track will be posted semi-daily over the coming weeks on some of JV’s favorite blogs, starting today, Monday July 23rd. The nerve center of this epic virtual journey will be http://www.barsuk.com/EmeraldCity.html, where new online tour dates will be announced as they go live. No tickets to buy! No waiting in line! Just B.Y.O.B. (to your monitor) JV action.

Video one can be found @ Stereogum. Video two is @ Gorilla Vs. Bear, and stay tuned to John's site for all the videos as the tour continues on to You Ain't No Picasso, My Old Kentucky Blog, An Aquarium Drunkard, Chromewaves, Six Eyes, and The Catbird Seat.