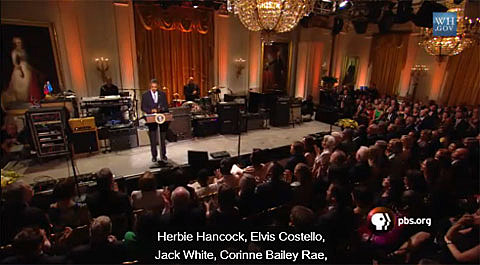 Dave Grohl and Jack White performed for President Barack Obama at the White House Wednesday during the ceremony for Paul McCartney's reception of the Library of Congress Gershwin Prize for Popular Song.

After Obama presented the award to McCartney, the performances began and White took to the stage for a rendition of the Beatles' "Mother Nature's Son." Grohl went on to perform the Wings hit "Band on the Run."

Past recipients of the Gershwin Prize include Wonder and Paul Simon. [RTT]

The full show is coming to PBS in July.