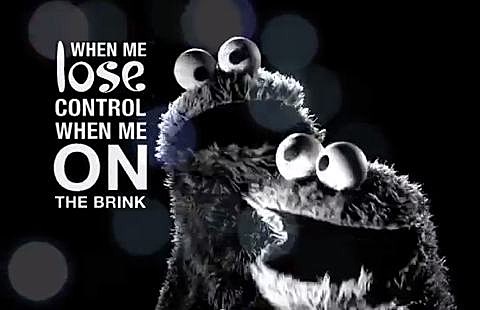 In the course of a week here at BrooklynVegan, we post a lot of videos. This week, for instance, featured new ones from MINKS, Chalk and Numbers, Chaz Chance & the Prophets, Medicine, Crocodiles, MGMT and more. But yet there are more videos still that we didn't get around to, which is where we are now. Check out clips from CHVRCHES, King Krule, Caged Animals, Cookie Monster covering Icona Pop, CYHSY, Schoolboy Q & Kendrick Lamar, Dave Hill onstage with Phil Anselmo, and a Mumford & Sons video that even haters might...this was okay. Those and more, below.

Dave Hill muscles his way onto the Phil Anselmo & The Illegals stage in Cleveland for a rendition of "Fuck Your Enemy" by Anselmo's band Superjoint Ritual. Make sure you stay until the end to see Hill's "Eruption"-like shredding. Look for Dave and Phil to shred some laughs on a TV near you soon.

Clap Your Hands Say Yeah may not be exactly the same band they once were, but Alec's voice was always a big part of their sound, and hearing his signature quiver take on Frank Ocean's "Lost," which he did at a recent Philly show, is pretty great. Check it out.

In addition to being one of the strongest rap singles of the year, Schoolboy Q's "Collard Greens" with Kendrick Lamar is one of his trippiest tracks yet, so it only makes sense that he's given it an equally trippy video treatment, complete with kaleidoscopic visuals.

Scottish synthpoppers CHVRCHES will release their debut album next month, which will likely be the final booster to rocket them into outer space. Meanwhile, they just made a video for "The Mother We Share" which has been out for nine months...but it's your money, folks.

If you can understang Archie Marshall's thick-as-marmite South London accent, the singer known as King Krule paints vivid portraits of UK urban life. That comes to life in the new video for single "Easy Easy" which spends a day in Archie's world.

This isn't some Adult Swim stoner comedy thing; Sesame Street legitimately made this video of Cookie Monster turning Icona Pop's "I Love It" into a song about wanting a cookie but waiting until later to eat it. And the fact that this is actually marketed towards children makes it even funnier.

Caged Animals - "Too Much Dark"

Caged Animals' new album, In the Land of the Giants, will be out in a couple weeks. Tide yourself over with the new video for single "Too Much Dark" that follows a boy and a perhaps imaginary friend.

You can say a lot of things about massively popular UK folk group Mumford & Sons but "having a sense of humor" is not generally one of those. But here's the video for "Hopeless Wanderer" that starts off dusty and serious and like everything else they've done... until you realize, hey that's not Mumford, or his sons.

Got 12 minutes to spare? Check out a compilation of "the greatest vines" and you may not be able to take your eyes away. With Vine length maxing out at six seconds, it's a lot of clips: