still from Arctic Monkeys' Why'd You Only Call Me When You're High? 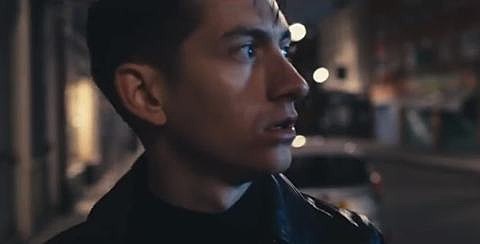 In the course of a given week, we post a lot of new videos on BrooklynVegan. For example, this week we gave you ones from Krill, Love Inks, Big Dick, Restorations and more. But there are lots more we don't get around to and that's where this post comes in. You can check out Mac DeMarco hosting the new episode of Weird Vibes from the 2013 Pitchfork Fest, plus videos from Anika, Just Blaze & Baauer, Youth Lagoon, Starred, Camera Obscura, These New Puritans, and a full live performance from Iceage at a festival in France.

All those can be watched below...

For those who have seen Mac DeMarco in interviews or on stage (or in other videos) and thought, "Someone should get this guy his own show," here is further evidence to support that. Weird Vibes basically sets Mac loose at the Pitchfork festival. You should watch for yourself, but at one point he does say,"I'm hoping at some point in the fest to get a little bit of that sweet gold from R. Kelly's penis sprinkled onto my young male body."

Arctic Monkeys - Why'd You Only Call Me When You're High?

Big time video director NABIL (Bon Iver, Frank Ocean, James Blake) takes the concept for Artic Monkeys' "Why'd You Only Call Me When You're High?" (from the forthcoming AM) literally for a hallucinatory night of pub crawling. Don't try this at home.

Youth Lagoon's music has always sounded like the soundtrack to a young kid exploring something new for the first time, and the visuals in his new video for "Raspberry Cane" portray a type of imaginary world that you might picture one of those kids inventing in their heads. And like the song itself, it's a little trippy.

Anika has always put her own spin on the covers she does, but her take on Chromatics' "In the City" (from her most recent EP) is one of those rare occasions were the new may best the original. The video for the song pits a bunch of young men in a contest...but for what?

Camera Obscura - Break It To You Gently

Those who always loved Blur's video for "Coffee & TV" (the one with the milk carton), will probably enjoy this very cute clip for Camera Obscura's "Break it to You Gently" (from their new album Desire Lines) featuring a shopping cart with a mind (and heart) of his own.

Around the time that Baauer became an internet sensation, he made a track with hip hop production legend Just Blaze, "Higher." To add to that excitement, it included a Jay Z vocal clip, and now, adding to it even more, it's got an extravagant video by NABIL who makes his second appearance in this post.

These New Puritans dive even further into post-rock on their new album, Field of Reeds, and for the ambient cut "Organ Eternal," they've now got a video of slow moving images that complements it nicely.

Denmark's Iceage are known for their wild, intense live shows -- which you can witness for yourself when they do two shows at Brooklyn's Acheron in October. You can watch video of yesterday's performance (8/15) from this year's La Route du Rock festival which just happened in Saint-Malo, France.