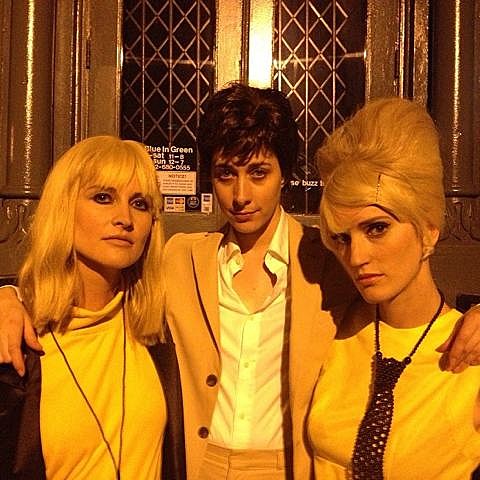 In the course of doing what we do here at BV, we've already posted a bunch of videos this week like Arcade Fire, Deerhunter, Glasser, Kanye West, Sarah Neufeld, Goldfrapp, Mates of State, Lou Doillon, and more. But unfortunately we don't get to all the cool videos that come out during the week (or weeks), so here's our attempt at playing catch-up. Check out Au Revoir Simone remaking an '80s Scorsese classic, plus videos from Franz Ferdinand, Wavves, Father John Misty, Waxahatchee, Julia Holter, Eagulls, and one of Disappears covering U2, below.

Martin Scorsese's 1985 film, After Hours, is a classic New York film, detailing one extremely long, insane night in the scary-dangerous downtown neighborhood of SoHo. A film totally of its time, that story could never happen today, but Au Revoir Simone sure look like they had a great time remaking it in the video for their new single, "Crazy." Heather, Annie & Erica all play multiple parts and directors Alex Braverman and Poppy de Villeneuve did a great job of recreating the original's manic energy. Look for ARS in New York during CMJ.

The former Fleet Fox is still riding high off the release of his 2012 debut LP, Fear Fun, and he's just given video treatment to another of its tracks, "I'm Writing A Novel." It looks like FJM had a good time with this one, splicing tons of not-so-serious clips together as the song plays. Check out the video below, and catch him when his tour hits NYC in October.

As mentioned, newish UK group Eagulls will be playing their first NYC shows next month during CMJ. The band's video for new single "Nerve Endings" features a time-lapse shot of a brain decomposing. Gross. It was meant to film for ten days, but slight hiccup when the band forgot to pay their gas bill. The utility guy came by their house, saw the brain, called the cops, who they cordoned off their house and changed their locks. Use your head, kids, don't play with brains!

In Waxahatchee's new video for "Misery Over Dispute" from her excellent 2013 record, Cerulean Salt, main member Katie Crutchfield is filmed in black and white tap dancing and singing along to the song. Check it out below, and see her in NYC next week on her tour with Screaming Females and Tenement.

Julia Holter - "This Is A True Heart" Official Video

Julia Holter's brilliantly crafted new experimental pop album, Loud City Song, just came out and she's just made another video from the album, this time for the song "This Is A True Heart." The video, subtitles and all, tells its own mystery-movie story as the song tells its own. Sometimes they do overlap though, like when a sax player shows up. Her tour with Nedell Torrisi hits NYC soon as well.

Wavves, whose tour with King Tuff and Jacuzzi Boys hits NYC in October, is contributing to the new Grand Theft Auto, and last night (9/13) on 'Conan,' Nathan & co. performed a new song which will be featured in the game, "9 Is God." It's one of the bands more alt-rock style cuts, and ends with a nice guitar freakout.

As frontman Brian Case notes in the video's intro, Disappears usually try to make covers they do sound like his band wrote it, but in this case -- for AV Club's "Undercover" series -- they are pretty faithful to the U2 original. Disappears will be in NYC with Weekend next month.