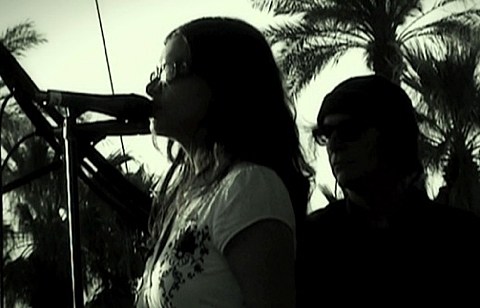 We already posted a bunch of videos this week like MGMT, Schoolboy Q & Kendrick Lamar, Elvis Costello & The Roots, Pixies, Yamantaka // Sonic Titan, Dream Boys, Les Savy Fav, Yuck, and more. But unfortunately we don't get to all the cool videos that come out during the week (or weeks), so here's our attempt at playing catch-up. Check out videos from FKA twigs, Holy Ghost!, Mazzy Star, Superchunk, Har Mar Superstar, La Femme, and Shine 2009, below.

London's Young Turks-signed FKA twigs has been getting a ton of internet buzz lately for her trip-hop-inspired sound. This week she released a new EP, EP2, with co-production from UNO producer and Yeezus collaborator Arca. Check out the video for a track from that EP, "Papi Pacify."

Holy Ghost's new album came out last week and opens with this groovy midtempo number that shows off the duo's skill with vintage synths. For the video, director Ben Fries pulls back a slow zoom, revealing a Russian nesting doll's worth of eyecandy. Catch them live in NYC on Halloween.

Mazzy Star are fully back with their first new album since 1996 and a tour, and they've now made a video for that album's single "California." The video's got slow-moving visuals that work perfectly with the dreamy sounds of the song.

Superchunk are back with their second post-reunion album, I Hate Music, and they've made a video for its very punk rock track "Staying Home." It's a weird, fun video with a lot of stop-motion involved. Superchunk will be in NYC when their tour with Spider Bags hits Bowery Ballroom for sold-out shows on September 27 and 28.

True fact: today (9/20) is Har Mar Superstar Day in Minneapolis. If you're not there to celebrate, you can watch this video for his song "Prisoner." The track was co-written by The Strokes' Fab Moretti, and the video stars Juliette Lewis. Like so much of his life, this scenario involves a dance-off, but this time on BMX bikes. Did you catch him last night opening for Yeah Yeah Yeahs?

Finish duo Shine 2009 will release their second album, Our Nation, later this month. Director Eugene Kotlyarenko directs the album's new single, "Older," taking the title to heart in a story about a girl who deals drugs to geriatrics.