still from Phoenix's "Trying to Be Cool" 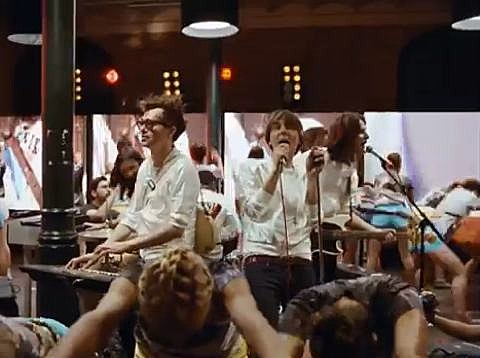 We've already posted a bunch of videos this week like Rhye on 'Jimmy Kimmel', Fucked Up on the Chris Gethard Show, Ex Cops in the BV Studios, Jherek Bischoff and David Byrne, Katerine, Jaguar Shark, and more. But of course we don't get to post about all the cool videos that come out during the week (or weeks), so here's our attempt at playing catchup. Check out videos from Phoenix, The Julie Ruin, Speedy Ortiz, Lindstrøm, Titus Andronicus, a trailer for a documentary about M.I.A., the new episode of Weird Vibes, and more, below.

Phoenix - "Trying to be Cool"

Arguably the best song on Bankrupt!, the video for Pheonix's "Trying to Be Cool" takes the title to heart. Shot like a live video, directorial ensemble CANADA fill the performance with all sorts of touches -- baboons, doves, explosions, impressive ping pong playing - and more. The most unbelievable thing about the video? Michel Gondry was not involved.

Titus released their newest album, Local Business, last year, and they've just now revealed the video for one of its standout tracks "Still Life With Hot Deuce And Silver Platter." For this one, they've got footage of the band playing a wild show at the intimate Brooklyn DIY venue Shea Stadium (where some Titus members work).

Lindstrøm's new single is almost impossibly catchy and its promotional clip, directed by Kristoffer Borgli, has its own charms too. It's more like a short film than a video, following two young swimmers throughout their schoolday. Your enjoyment of this may hinge slightly on your ability to speak Norwegian.

While we wait for M.I.A.'s much delayed Matangi, check out the trailer for the yet-to-be-titled documentary about her. Look out for a Kanye cameo.

Kathleen Hanna's (Bikini Kill, Le Tigre) new band, The Julie Ruin, will release their debut album, Run Fast, on September 3 and they've just made the video for its single, "Oh Come On," which sees the band performing in a bright room and slipping each other little smiles throughout the song.

Speedy Ortiz's excellent debut album, Major Arcana, came out this week, and they also took this time to release the video for one of its singles, "Tiger Tank." The band perform in a basement, wild as their actual shows are (just with way more shredded paper), and there's a parallel story of a girl getting dressed and eventually ending up in the same basement as Speedy Ortiz, only to put on a mask and wrestle another masked girl in the paper shreds.

Okay fine, it's not exactly a video, but the first thirty seconds are, and then JT's new Michael Jackson-esque single, "Take Back The Night" (off of part 2 of The 20/20 Experience, due out on 9/30) plays. Check it out.

Want to see a bunch of new music videos with only one click, plus some snarky jokes aimed at crowdfunding? Look no further than the new episode of online show Weird Vibes.