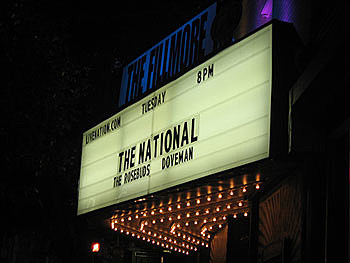 Do you recognize any of the extras in this new National video?

A few months back, the National talked to Spinner about playing an actual wedding on the cover of the 'Boxer' LP, during their Interface interview. In a similar vein, the group invited along some friends and family to play able-bodied extras in the video for 'Apartment Story,' which chronicles the events of certain social functions. "We shot this in the basement of a church a few blocks from my apartment in Brooklyn," singer Matt Berringer tells Spinner of the Banner Gwin-directed video. "We wanted to capture the sweet but awkward vibe of a wedding reception or singles mixer. [Gwin] knew exactly what we were going for, something between John Hughes and Krzysztof Kieslowski."

And for some added entertainment, here's another video that features some of the same people - partying it up again, but in a slightly less glamorous (Brooklyn style?) way:

The National is on tour with Doveman right now.