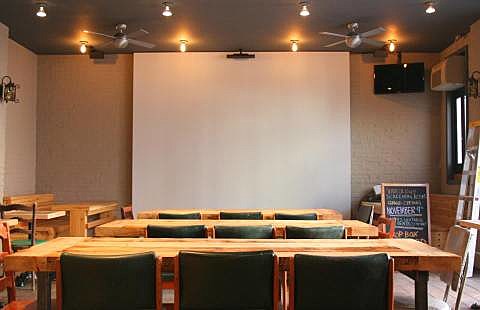 I started working at Videology in Williamsburg a month or so after it opened back in December 2003. My apartment's proximity to the store and the general fun vibe (and, yes, free rentals) kept me there since, and I worked the last night of its existence as a video store proper, one day after Hurricane Sandy hit (it was a busy weekend). The DVD business ain't what it used to be and about a year ago the owners decided to refashion Videology into a bar/cafe with a screening room while still renting DVDs.

This new incarnation opened on November 9 with a full bar in the front, and the screening room in back that seats about 40 people give or take. It's pretty nice, if I do say so myself. The events calendar is a mix of ticketed exclusive runs (like First Winter which screens this week), and free screenings, like the R. Kelly "Trapped in the Closet" marathon that happens on Friday (11/23). You can check out all upcoming screenings here.

This Saturday marks the debut of DAVE THE SPAZZ MOVIE CLUB which is "a new monthly series at Videology that will present the strangest, weirdest and wildest movies, short subjects, and forgotten ephemera with the occasional guest hosts and various surprises!" This Saturday (11/24) they'll be showing Phil Tucker's z-grade sci-fi classic Robot Monster (the one with the gorilla with a diving helmet) and it is also doubling as a benefit for Norton Records who lost so much of their vinyl stock in Hurricane Sandy. Tickets are $8 and are on sale now. And if you can't make it to the screening, you can help Norton Records in other ways.

Meanwhile, Videology is not the only new movie theatre in the neighborhood. Williamsburg Cinemas, a multiplex located at Grand St. and Driggs, is set to open early next month:

The final touches on Williamsburg Cinemas, Elgart's long-planned seven-auditorium movie hub on Grand Street and Driggs Avenue, will wrap up this weekend for the 1,000-seater theater to open in December, he said.

"We were planning on opening Nov. 2...then Sandy hit," said Elgart, the theater's owner and operator.

The Department of Buildings' final inspection of the space has been delayed by post-hurricane demands on the agency's time, Elgart said.
"We were going to start with the 'Life of Pi' and the new James Bond movie," he said. "Now we're shooting for Christmas titles."

Elgart, who already owns Cobble Hill Cinemas and Kew Gardens Cinemas, touted the theater's 3D screens, 7.1 surround sound, "rocking chair seating," and mix of indie and blockbuster movies.
"We'll be showing 'The Hobbit' in 3D," he said of one of the first planned films. - [DNAinfo]

This is in addition to Nitehawk Cinema, indieScreen and Spectacle, all of which are in five or so blocks of each other.