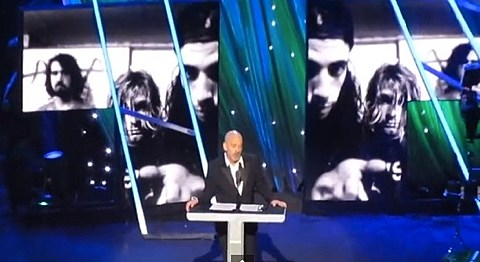 The 2014 Rock and Roll Hall of Fame Induction Ceremony happened last night (4/10) at Brooklyn's Barclays Center, which among other things, saw Nirvana getting inducted. You already saw pictures of their acceptance speech and performances with Joan Jett, Kim Gordon, St. Vincent and Lorde, and fan-made videos have since surfaced of them playing "Lithium" with St. Vincent, "Smells Like Teen Spirit" with Joan Jett, and their introduction speech by R.E.M. frontman Michael Stipe.

Stipe's speech talked about how Nirvana came from the '80s hardcore underground, called them greater than pop music, "artists in every sense of the word" and said they captured lightning in a bottle. In that same video, after Stipe's speech, Dave Grohl gives his acceptance speech in which he honors the four Nirvana drummers that came before him -- Aaron Burckhard, Dale Crover of the Melvins ("my absolute drumming hero"), Chad Channing (who he credited for the "In Bloom" drum fill), and Dan Peters of Mudhoney. Up next was Kirst Novoselic's speech, in which he thanked Sub Pop, Buzz Osborne of the Melvins, Nirvana producers Jack Endino, Steve Albini and Butch Vig, and others.

As you may have heard, after Nirvana's induction, the members and their guests headed to tiny Brooklyn venue Saint Vitus for a full set of Nirvana songs.

HBO airs the induction ceremony on May 31. Meanwhile, watch those fan-made videos below...