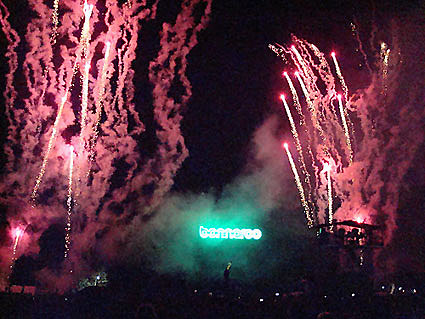 I hate Metallica now too, but that doesn't change the fact that they used to be the best...

Bonnaroo began in earnest Friday with the rarest of double bills: Chris Rock followed by Metallica.

Metallica's Lars Ulrich and Kirk Hammett introduced Rock, and the comedian in turn introduced who he called "the baddest ... band in the world." Both acts were unlikely fare for the Bonnaroo Music & Arts Festival, which began in 2002 as primarily a jam band event.

But in recent years, Bonnaroo has broadened itself and brought more diverse fans to its 700-acre countryside site south of Nashville. Among the tens of thousands of festival-goers, Rock, Metallica and many other performers were very conscious of their entry into a tie-dyed world they seldom traffic in.

In a bit in his set about Prozac and other medications, Rock chastised the crowd, who he said was likely on "performance-enhancing drugs."

"Do you feel good?" lead singer James Hetfield asked the crowd. "Metallica is here to make you feel better." [AP]