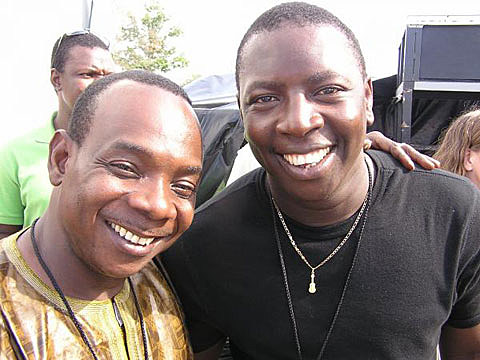 Vieux Farka Touré's show at The Haunt April 11 [in Ithaca] turned Sunday into anything but lazy. The Malian guitarist and singer -- son of famed guitarist Ali Farka Touré -- and his excellent outfit charmed the crowd last Sunday with his unique melodies and unbounded enthusiasm. Hippies swayed, hipsters nodded and ultimately the music proved irresistible too for the audience to refrain from frenetic dancing that broke out towards the end of the set. Touré and his band were even gracious enough to share the stage with a particularly ... enthusiastic member of the crowd.

Cornell Daily Sun: Your music clearly has many influences, how would you describe your musical style?

Vieux Farka Touré: My mentor and godfather Toumani Diabate baptized my music "koroboro rock" -- "koroboro" means "black African" in our main dialect. I guess that kind of sums it up -- my music is basically African but I mix it up with a little reggae, some salsa, some rock, some m'balax, some blues -- all the music I listen to, like people my age everywhere in the world -- and it comes out my own cocktail. I'd like to think that everyone who listens to my music finds something that pleases them.

Malian guitarist Vieux Farka Touré's latest US tour is underway - he continues with an April 15th show in Chicago, and finishes in NYC with a show at (Le) Poisson Rouge on April 27th. Soul reggae band Meta & the Cornerstones open, and tickets are on sale.