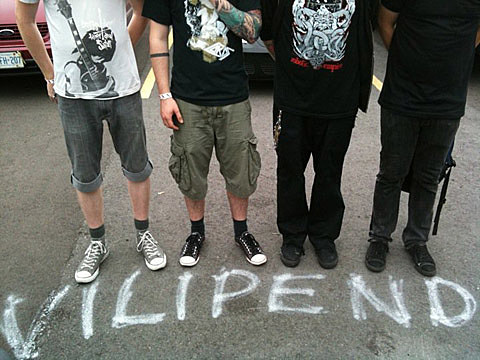 Canadians Vilipend aren't making any new friends with their vitriolic new LP Inamorata and that's the way they like it. Apparently the band isn't so chummy with landlords either, after bassist Michael J. Crossley was denied an apartment due to his "nefarious" associations. Quoth Crossley's potential landlord:

"I will be straight up with you both. We were quite ready to make a decision in your favour the other night.

However, upon investigation of the band Vilipend, it has brought forward some concerns for us. We are uncomfortable with the energy that this music manifests.

We really enjoyed meeting with you both and you have shown both professionalism and patience in this process. We thank you for that. However, we feel it is not the best fit for our house and our other tenants."

Inamorata isn't exactly unicorns and rainbows. The new LP, due via A389 Records on 8/16, carries on in the tradition of noisey hardcore like Converge and Botch with elements of sludgy misanthropy throughout. Check out "Last Stand of the Hopeless Romantic" which rears its ugly head for the first time below, alongside another three tracks from the record.

Vilipend are on the East Coast with NYC's Meek is Murder this August, and will swing through Lit Lounge on 8/20 to play a show with Tiger Flowers. All streams and tour dates are below.