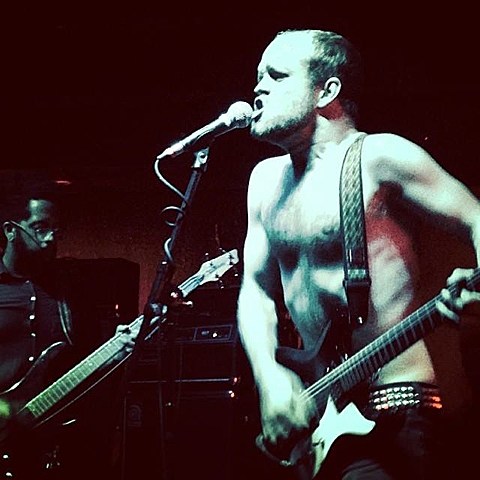 Pitchfork's Northside metal show with Pallbearer, Hull, Planning for Burial, Yellow Eyes and Vilkacis was last night, and I stopped by to check out Vilkacis's set, the one-man band's first and only since a live debut (with a live lineup) at "a basement show about a year ago," according to Michael Rekevics, the guy behind Vilkacis. You may know Rekevics from one of his other projects, among them Fell Voices, Vorde and Ruin Lust. He's usually behind the drums, as he is in Fell Voices, and one thing that the bands he's a part of have in common is relentless, furious drumming. That was on display last night as the four piece tore through a roughly twenty minute set, full of big, anthemic melodies buried behind a wall of driving guitar, bass and drums. Intensity was on high--Rekevics screamed sans mic for a good bit of a set, a bass string was popped loose by the middle of song two, and it didn't stop until it was abruptly over, after "Blood Dream in the Fever of War" wrapped up, when the drummer kicked over part of his kit and the four unceremoniously exited the stage leaving the rest of us to come back down to reality. Catch Vilkacis again at Martyrdoom, when the band plays on a stacked Tuesday lineup with Mournful Congregation, Lycus, Lord Mantis and Evoken. That will be one hell of a show.

The show ran late, and I'm told Pallbearer didn't take the stage until nearly 1AM. An aftershow was planned at The Acheron with Savagist, Yellow Eyes and "Goat Pope," a band that according the Acheron "cannot possibly play at the same time" as Pallbearer. That performance was canceled due to the late hour, and while Yellow Eyes and Savagist performed, we'll have to wait for another day for some more info on the infamous and mysterious "Goat Pope."

For more metal at Northside Fest, Watain are playing Brooklyn Night Bazaar on Sunday (6/15) with T.O.M.B. and Kosmodemonic. Tickets for that show are still available and we're also giving away a few pairs.