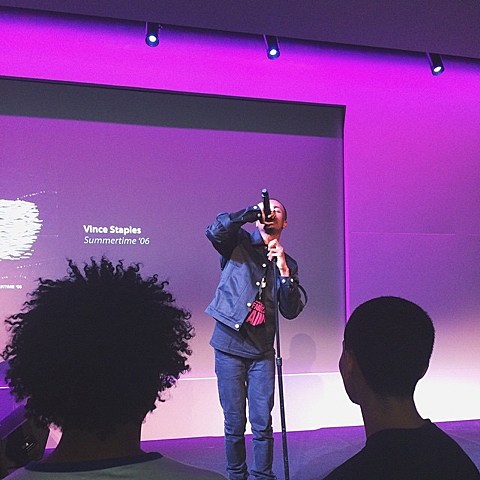 Long Beach rapper Vince Staples released his fantastic debut album, Summertime '06, yesterday (6/30) via Def Jam, and celebrated with two shows in NYC. The first was an in-store at Apple Store SoHo, and then he headed to Best Buy Theater for the 2015 XXL Freshmen show with Fetty Wap, DeJ Loaf, Tink and more. That's a pic of him at the Apple Store above, and you can watch a video of him playing "Señorita" from the new album at the Best Buy Theater show, below.

In continued celebration of the 2015 XXL Freshmen Class, Vince took part in an XXL Freshmen cypher with GodLink and OG Maco. Video of that is below too.

And lastly, Pitchfork.tv featured Vince in their newest episode of "Over/Under" today. The series has artists "evaluate a series of random topics, declaring if they're overrated or underrated." To quote Pitchfork:

Vince Staples discusses sobriety, the Amish, KFC ("Fuck the Colonel. Fuckin' asshole. He's a slave owner"), Tom Cruise, PETA ("Tell PETA to save a fucking rhino and stop worrying about what somebody's wearing"), Oprah, Bill Nye the Science Guy ("Bill Nye is the reason all these kids know how to proportion their lean in their beverage"), and more

Watch that video below as well.