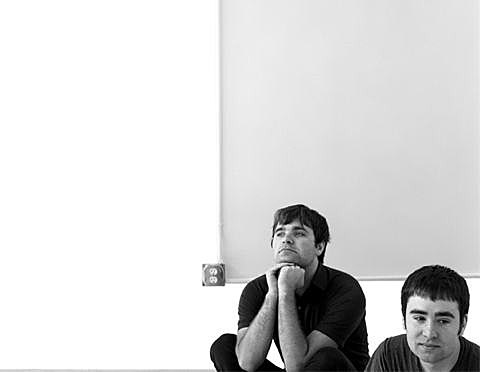 We mentioned that Blur and The Stone Roses are reuniting for Coachella 2013, and as usual there some other interesting reunions at the festival too.

Violent Femmes, who called it quits in 2009, appeared on the lineup announcement. Unlike Blur or The Stone Roses, this is the first we're hearing about them getting back together, so hopefully we'll get some more shows from them. They last played NYC in 2007. Some classic Violent Femmes videos are below.

As promised, The Postal Service are in fact confirmed for Coachella. They recently confirmed their 2013 reunion, and are also part of the Primavera Sound lineup.

It wasn't even two full years ago that Nick Cave said he was done with his Grinderman project for a while, and we know that The Bad Seeds are back this year (and also playing Coachella), but he's got Grinderman on the lineup too. Grinderman plays day 1 and the Bad Seeds play day 3.

One of Ian Svenonius' many bands, The Make-Up, reunited last year and played ATP NYC, and they're also included on this year's Coachella lineup. Meanwhile, you can catch Ian in NYC on his book tour tonight (1/25) at LPR and Monday (1/28) at WORD Bookstore.

New Order (without Peter Hook) made their live return last year, and after releasing their "lost" album, Lost Sirens, this year, they were announced for Coachella as well. The way things have been going, we probably can't count on Hook being there, but like Ian Svenonius, you can catch him in NYC on Monday (1/28) for his book talk.

Fellow new wave icons Orchestral Manoeuvres in the Dark (aka OMD) returned in 2010 and they're promising a new album out on April 9, just before Coachella begins. They've also talked about a North American tour, which presumably will be announced soon with dates surrounding the festival.

Descendents have been back for a little while at this point, but a reunion show from them is always exciting, and this year's Coachella should be no exception.

Dead Can Dance have been back for a bit too, having released a new album, Anastasis, and gone on a tour last year, and they'll be at Coachella this year as well. They're also playing Primavera Sound and just launched a video competition.

Two-Tone legends The Selector (they shared a side of the label's first-ever 7") will play as well. The band have reformed a few times over the years, with different members offer rival versions of the band. Singer Pauline Black and Gaps Hendrickson feature in the line-up coming to Coachella.

And maybe most surprsingly on this list of Coachella reunions is The Three O'Clock who were intregral in the '80s "paisley underground" scene in Los Angeles. Fronted by bassist Michael Querico, the band made 1985's cult classic Arrive Without Traveling, ended up signed to Prince's Paisley Park records where they made one album before breaking up in 1988.

LA hip hop collective Jurassic 5 are also reuniting for Coachella. More on that and other hip hop at this year's festival coming later.

The Three O'Clock - "Her Head's Revolving"