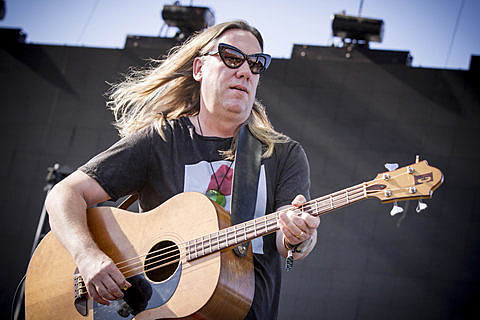 Acoustic punk vets Violent Femmes have been back in action this year (now with Dresden Dolls' Brian Viglione on drums), and one of their reunion dates was a NYC show in Central Park back in September. Though as you may have heard, that show abruptly ended early due to flooding. Via Glide:

After playing only five songs, and waiting 20 minutes for the lightning strikes to pass, they were told to cut the performance short. "It's nobody's fault; it's the law," bassist Brian Ritchie apologized, promising they would return in October. Behind him a crew scrambled to cover the instruments with tarps. At 7:48, event security ordered Rumsey Playfield cleared, and an exodus of people retreated into the park, where its roads swelled with ankle-deep water.

Violent Femmes have now scheduled what appears to be a one-off in NYC, perhaps to make up for that Central Park show, happening on November 14 at Roseland Ballroom (one of the last shows for the venue). Tickets for the show go on a "special presale offer" today (10/24) at 10 AM, with Citi Cardmember and Live Nation/Mobile App presales starting today at noon. General on-sale begins Friday (10/25) at 10 AM.

UPDATE: Tickets purchased for the Central Park show will be honored. You must present original tickets with valid ID.

The only other Violent Femmes date we're currently aware of is Australia's The Falls Music & Arts Festival.

Watch a video of the band at Riot Fest Chicago 2013 below...