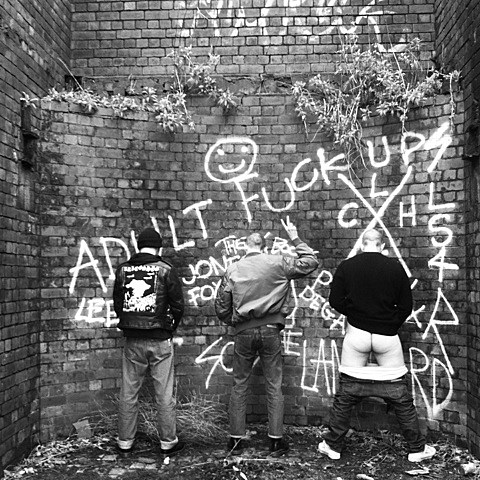 Violent Reaction, the UK straight-edge one-man ripper who are fleshed out into a full ensemble at live shows, tear through straight-edge anthems flavored with a UK flare. They're currently on a US tour with fellow countrymen The Flex who brandish chunky chugs a la a speedier Slapshot. The tour kicked off in April at DC's Damaged City fest and will swing into a NYC for a night of classic-leaning core on May 24 at The Acheron. That show is with New Jersey's Altered Boys, who will be making their first NYC sojourn in quite a spell, MFP and Closet Case (who also play the Sad Boys Japan tour kickoff). Tickets for the NYC show are on sale now. All remaining tour dates are listed below.

Speaking of European bands playing Acheron, Italy's 30-plus year old core antagonizers EU's Arse bring their current North American tour to the Brooklyn venue on May 17. They'll share the stage with the furious Ajax, Sunshine Ward, and Creeping Dose. Tickets for that show are on sale. All remaining EU's Arse dates are listed below.

As usual, there are plenty of other upcoming punk shows at Acheron as well. Copenhagen's nervy and noisy post-ers Lower bring their tour to the venue on May 30 to rattle your bones along with Dark Blue and La Cruor. (tickets). That show's two days after they play Nothing Changes (5/28) with Survival.

Washington, D.C.'s Red Death, another project of the always-busy Coke Bust, will deafen all comers as part of the grind-y triumvirate including Brain Slug and Grudges. (No tix link yet, but the show announcement has the price at $8.) This will be Red Death's first New York appearance, though you can catch natives Brain Slug earlier at the Black N Blue Bowl.

Not at Acheron, but another likeminded local punk show goes down at Lulu's on June 6 with the abrasive Goosebumps joined by Skin Colour, Exotic Functions, and Pleasure Industry. ($5 at the door.) Even sooner than that, there's a Breakdown Brunch at Lucky 13 Saloon in Park Slope this Saturday (5/10). The event begins at 3 PM and promises free vegan BBQ, affordable booze consumables, and DJs spinning "the most ignorant hardcore." Not a bad way to ring in the weekend.

Lists of dates for the Violent Reaction and EU's Arse tours, with some streams, below...