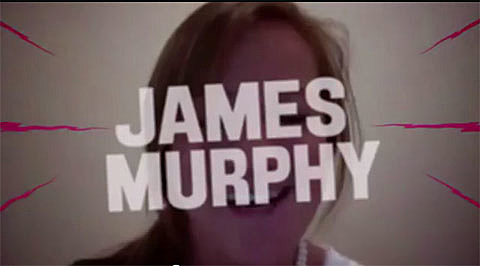 The above pictures is a screen shot from the Virgin Freefest lineup announcement video that they posted to YouTube. The girl behind the words exclaims, "James Murphy solo!" as she reads her piece of the September 10th free MD festival lineup. The full lineup, video, poster and press release is below... 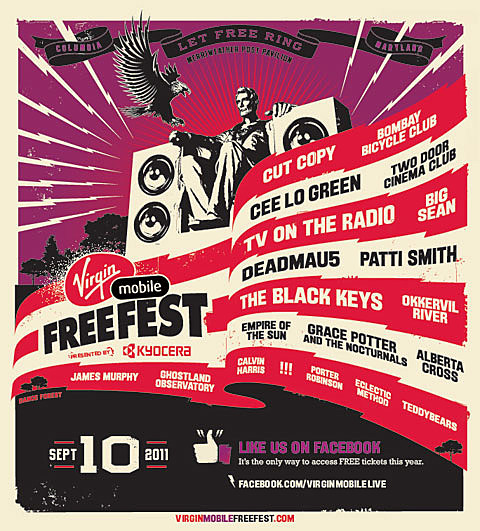 The Black Keys, Deadmau5, Cee Lo Green, Big Sean, TV on the Radio, and a
dozen other of the year's biggest stories take the stage Saturday, Sept. 10,
at Merriweather Post Pavilion, Columbia, Md.

WARREN, N.J. - July 11, 2011 - Founder of Virgin Group, Sir Richard Branson, along with select Virgin Mobile Live Facebook friends, unveiled the date and lineup for the Virgin Mobile FreeFest presented by Kyocera. The Billboard award-winning festival, known for breaking from traditional music events, delivered the message via a video posted on Virgin Mobile Live's Facebook page. This year it will be free again, and the festival will feature some of the most relevant, important and eclectic artists filling two Main Stages and the Dance Forest. Virgin Mobile FreeFest will be held Saturday, Sept. 10, at Merriweather Post Pavilion in Columbia, Md. The lineup on the Main Stages includes The Black Keys, Deadmau5, Cee Lo Green, TV on the Radio, Patti Smith, Empire of the Sun, Cut Copy, Grace Potter & The Nocturnals, Okkervil River, Big Sean, Two Door Cinema Club, Alberta Cross, and Bombay Bicycle Club. The Dance Forest will feature James Murphy, Calvin Harris, Ghostland Observatory, !!!, Porter Robinson, Eclectic Method, and Teddybears. "It's so much fun to be a part of this," said Seth Hurwitz, chairman of I.M.P. and Virgin Mobile FreeFest producer. "As a promoter, I enjoy watching 40,000 people walking around, having a blast, feeling very lucky they got a free ticket...it's my favorite day of the year. There are a lot of bands vying to play this festival, but, because we give all the tickets away, we get to choose based on nothing but who we think are the most happening. I suppose it's a bratty approach, but we just want people to see this festival as THE list of the absolute coolest bands and stories of the moment." Tickets to the 2011 Virgin Mobile FreeFest will go "On Free" to the public at 10 a.m. (EDT) Friday, July 15, via Virgin Mobile LIVE on facebook.com/virginmobilelive. Fans must first "like" Virgin Mobile Live before they are eligible to secure free tickets. Virgin Mobile customers and Virgin Mobile Festival ticket holders from the past five years will be invited via text and email to a private "free-sale" (much like a pre-sale, except free) to be held at 10 a.m. (EDT) Thursday, July 14, also at facebook.com/virginmobilelive. "This free festival represents everything our brand stands for," said Ron Faris, director of Brand Marketing for Virgin Mobile USA. "We're very proud of our deeply engaged fans who donate their time and money to youth homelessness through this concert. During the last two FreeFests, nearly $300,000 has been raised, and volunteers have given more than 55,000 hours of their time to the cause. This festival is dedicated to them. Giving away free tickets to our most loyal fans on our Virgin Mobile Live Facebook page is an absolute pleasure." The Virgin Mobile youth homelessness initiative is the focus of The RE*Generation project, the pro-social effort by Virgin Mobile USA dedicated to raising awareness of the plight of at-risk and homeless youth. Kyocera Wireless will be presenting the festival for its sixth year and will be showcasing new and innovative ways to express its enterprise-wide greening initiative on the festival grounds. Headquartered in Kyoto, Japan, Kyocera will also be following Virgin's philanthropic lead by collecting donations on site to aide in the recovery effort from this year's devastating earthquake and tsunami. During the last two years, Virgin Mobile FreeFest's tens of thousands of tickets were scooped up in just minutes. Replacing the VIP ticket this year will be a limited number of FreeFest Premium Ticket Packages, which include admission to the festival, a FreeFest T-shirt and poster, a souvenir cup that comes with discounts on drinks, and early admission to the grounds. These limited special packages will be available via merriweathermusic.com or ticketfly.com. In keeping with the "free" mantra, Ticketfly is waiving all service charges on free tickets when fans pick up their FreeFest tickets at Merriweather or the 9:30 Club in Washington, D.C., or print their tickets at home.