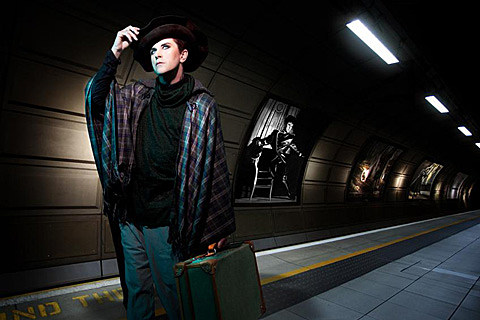 New Romantic icon and former Visage singer Steve Strange died Thursday (2/12), suffering a heart attack while on holiday in Egypt. He was 55. In addition to Visage, Strange was known for running the door at late-'70s/early-'80s London clubs Billy's, Blitz and the Camden Palace:

"Steve's door policy was fantastic," recalls Midge Ure, who played alongside Strange in Visage. "He wouldn't let in anyone he didn't like the look of.

"So he famously turned away Mick Jagger because he thought he was too rock and roll. But when David Bowie turned up, all these cool kids suddenly went into turmoil and meltdown because the king had appeared."

Strange told The Independent in 2000: "I remember David Bowie coming to the club because he had heard how bizarre it was. I would stand on the door and I was so strict.

"If people turned up in a wetsuit with their face painted black and white I would say: 'Sorry you can't come in.' It wasn't about that.

"It was about showing your creative side, and about showing that you'd taken time and effort in what you had created. It was about classic style and being outrageous, but done with an element of taste.'' - [BBC]

Midge Ure, who was in Visage with Strange, offered his sympathies:

As co founders of electronic band Visage, Rusty Egan and I are devastated to hear of Steve's untimely passing. He epitomised the vibrancy and flair of the eighties and will always be remembered for being one of the instigators of the Blitz Club and figurehead of the Blitz Kids.

One of the most famous "Blitz Kids" was Boy George who ran the coat check and would go on to form Culture Club. He tweeted, "Heartbroken about the death of my friend Steve Strange. So bloody sad. Such a big part of my life!." Meanwhile, onetime Soft Cell singer Marc Almond had this to say:

Steve Strange was a person who made the World a more colourful and wonderfully mad place, was always so sweet to me from way back in 81 at Molly Parkin's parties, The Camden Palace, Club for Heroes to recent '80s-related appearances. He WAS the New Romantic! Sad loss. And even when I was a provincial Northerner with all the wrong clothes he was such a nice Guy. A light goes out.

You can read more about him and the days of the Blitz club in a nice peice at The Guardian. Steve, you'll be missed. Rest in peace.

Check out a few Visage videos below.