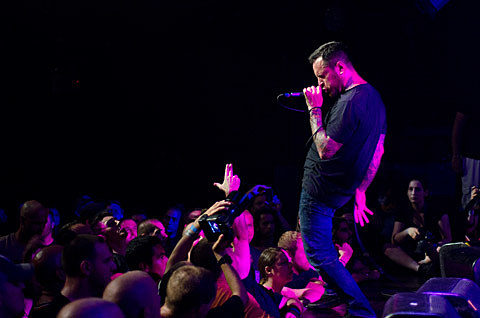 "Our hearts go out to those severely affected by this tragic incident. Being from Long Island, Hurricane Sandy has (quite literally) hit home for us. The music scene in Long Island, the New York metro area and New Jersey have been so supportive to Vision of Disorder over the years that we felt donating the proceeds from the Brooklyn show was a no-brainer. We are proud to announce that the opening acts (Primitive Weapons, Yuppicide, Swarm of Arrows) have also agreed to donate their proceeds. We hope that this small gesture can add to the ongoing efforts and help rebuild these traumatized areas. We look forward to seeing you all on November 24 to support this cause." -[Tim Williams, Vision of Disorder]

Kudos to the bands for turning their MHoW show on 11/24 into "Picking up Change: Hardcore for Hurricane Relief," with all the bands donating their money to the Red Cross. Mosh against Sandy by buying tickets HERE.

As you may remember, Primitve Weapons recently played CMJ as part of Show No Mercy (pictures). VOD's last outing in NYC was at the infamous Sick of it All/Cro-Mags show that ended with Harley Flanagan's arrest.

So far no other dates have been scheduled for VOD in the US, though the band will hit Australia with Ghost in the new year. All tour dates are below.

In other hardcore-ish news, Texas is The Reason, who reunited for Rev25 (pics) and also played Saint Vitus (pics), will also play the Chicago Revelation show in early January. In addition, look for the band to play a few extended weekends through late March. No new NYC date, but they will play Philadelphia on February 16 and tickets are still available.