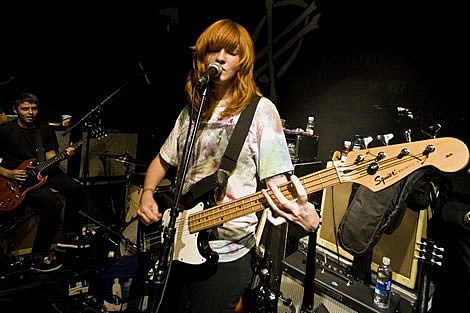 The L Magazine (aka Marc Hogan): I know you've covered one of the Wipers' songs. Is there an album in particular of theirs that you guys are big on?
Kickball Katy (aka 1/3 of Vivian Girls): We love Youth of America. Like, the first couple. Youth of America, the Over the Edge album and Is This Real, those are three of the best albums ever made, in my opinion. Cassie definitely agrees, and so does Ali. We just wanted to write some crazy songs like that. We're not that good, but we do like those albums a lot, and those are the things that we really had in common. We also really liked Dead Moon. They're in that new band, what is it? Pierced Arrows. I haven't seen them yet, but I saw Dead Moon like two years ago and it was awesome.

The L: Not to belabor the point, but with Frankie, that was officially a "kick out" not an "I'm quitting" kind of thing?
KK: Yeah, I wouldn't want to harp on this too much, but yeah, we had to ask her to leave. For various reasons that I won't get into.

The L: You guys are still friends with Crystal Stilts?
KK: We love Crystal Stilts. JB [Townsend, guitar], Brad [Hargett, vocals], and Andy [Adler, bass] are three really, really cool dudes. We were just hanging out with them the other night. We're still good friends with them. Things are cool, still.