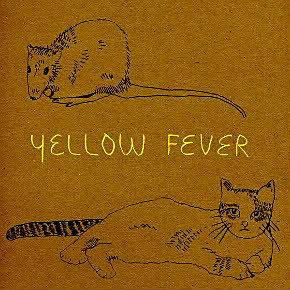 Austin's understated, lovely Yellow Fever launched a short West Coast / South West tour last night in San Diego, and are also set -- any day now -- to release their debut album on Wild World Records, the label run by Vivian Girls. The album appears to be a compilation of Yellow Fever's three EPs to date. For those who haven't been following along, it'll be a nice one-stop way to play catch-up. Hopefully we'll get a new record sometime soon -- it's been at least a year since we've gotten fresh music from them. Yellow Fever will also be playing Death By Audio on December 12 with Vivian Girls, which probably means they'll be doing a few more NYC dates around then as well. Stay tuned.

Until now, Wild World has just released Vivian Girls singles ("Surf's Up" and "Wild Eye") but will release a posthumous LP of Cassie Ramone's other, now-defunct band, Bossy, as well as the debut single from Babies, which is Cassie and Justin from Bossy, plus Kevin from Woods. The Yellow Fever and Bossy LPs will be out mid-November, the Babies single "coming soon."

Vivian Girls are busy this weekend, beginning tonight (11/5), where they'll back up (with help from Andrew WK) Fucked Up at Brooklyn Masonic Temple. And then they play Market Hotel Friday night with Grass Widow, The Bitters and Stupid Party.

All dates for Yellow Fever and Vivian Girls are below....