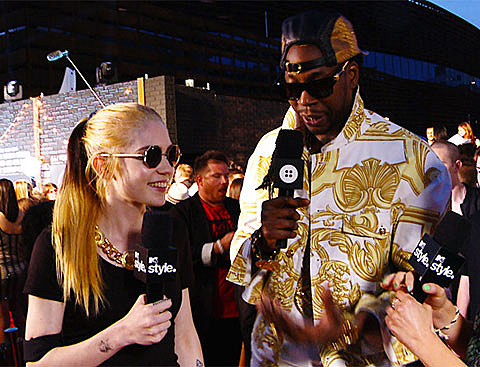 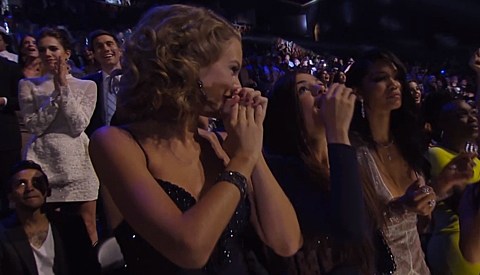 From many points in Brooklyn, one could look up and see the lit up blimp in the air hovering over the Barclays Center yesterday (8/25). It was where the overhead shots were being filmed during the pre-show which included the big crowds outside around the Brooklyn streets that MTV got closed down to create the red carpet for the VMAs....

A red carpet, set up on Dean Street near Flatbush Avenue, was completely invisible to many non-ticketed fans and the general public who were mainly cordoned in a pen at the Best Buy on Atlantic Avenue between Fort Greene Place and Sixth Avenue.

Another penned area, at Sixth Avenue and Bergen Street, gave a small group of fans a distant peek at the carpet, but it was still a full city block away.

"Obviously they can't let everyone in for security reasons, but we can't see anything at all," said Donna Hall, 28, who came from Queens. "I've been out here with my friends since 3 p.m. and we've been trying to find the best vantage point possible, but we settled here because at least we could see a glimpse of the red carpet. [DNA Info]

Daft Punk didn't perform, but they did walk the red carpet and sit in the audience in their masks which they also wore to present 'Best Female Music Video' with Pharrell Williams and Nile Rodgers. They also debuted part of the video for "Lose Yourself to Dance."

Vampire Weekend, who are headlining the Barclays Center in September, presented an award to One Direction.

Jay-Z and Beyonce were strangely nowhere to be found.

Eminem also pulled a Jay Z and announced his new album, MMLP2 (the sequel to 2000's Marshall Mathers LP), in a commercial that aired during the VMAs. The album was executive produced by Dr. Dre and Rick Rubin, and it's due out November 5. Meanwhile, the single, "Berserk," will drop this Tuesday (8/27).

And before it all began, Grimes co-hosted the Red Carpet Report. Who wore it better, Grimes or 2 Chainz?

If you watched, what did you think? Should Miley Cyrus stop being so trashy? Should Robin Thicke stop being so creepy? Should Kanye stop being so serious? Does Justin Timberlake have really long arms? Does anyone really care that *NSYNC showed up (for a minute and a half)? If you didn't watch, or need a refresher, some videos from the night are below...

Kanye West - "Blood On The Leaves"