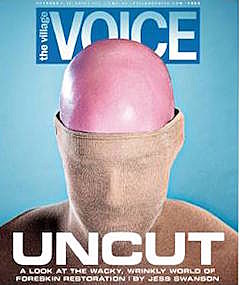 In other publishing turnover news, Voice Media has sold The Village Voice:

Voice Media Group announced Monday that it has sold its flagship title to a company controlled by investor Peter Barbey of the Reading Eagle Company, a family-owned business that says it has been publishing newspapers since 1796. The announcement was made jointly with Barbey's investment company, Black Walnut Holdings.

An acquisition price was not disclosed.

The sale caps months of speculation about the future of the Voice since Voice Media Group announced in January that it was looking for buyers of some of its alternative newsweeklies around the country, with the help of the mergers and acquisitions firm Dirks, Van Essen & Murray.

"We don't have any plans to do any more sales right now, but we're always happy to have a conversation or a serious discussion about any of our properties," Voice Media Group executive associate editor Andy Van De Voorde told POLITICO in a brief interview. - [Capital NY]

In 2005, The Village Voice was sold to New Times Media, owners of many similar alt-weeklies across the country, which was then renamed Voice Media Group in 2013. Voice Media Group will continue to sell national advertising for the Voice. For those who fondly remember the Voice from it's heyday, the acquisition may not be a bad thing. Mr. Barbery, who is from the 48th richest family in America, talked to the NY Times:

"I realize that The Voice has had a unique journalistic role in New York and the country as a whole," Mr. Barbey, 58, said. "That deserves to survive and prosper."

The paper, he said, was once an essential "voice of the arts and cultural community in New York." While he will not take over full control of the paper until February, Mr. Barbey said he would focus first on bolstering its arts coverage -- mainly by attracting top writers.

"Over the years it's been known as a place that made writers' reputations," Mr. Barbey said. "If you were a good writer, you wanted to write for The Voice."

"One of the biggest problems in media today is lack of attention to content," he said. "Many publications have stripped their content."

That will not happen under his watch, he said.

It will be interesting to see what happens next.