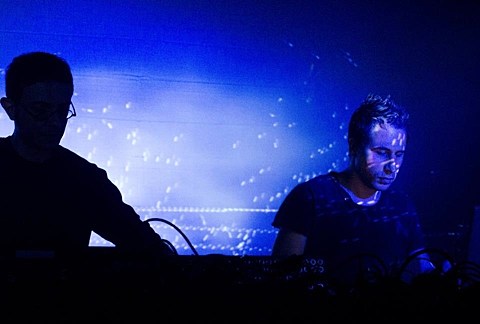 Italian ambient duo Voices from the Lake (aka Donato Dozzy and Neel) have teamed up with The Bunker's new record label (the same people who throw the NYC parties) to release the followup to their 2012 self-titled debut album. The new release is an EP titled Velo Di Maya, and will be out on March 10. Resident Advisor says the relationship between The Bunker and VFTL began when the duo made their NYC debut at a Bunker party at Public Assembly in 2012. The label called it "one of the greatest nights of music in the history of The Bunker," and said, "We immediately got on them about their plans for the tracks. We agreed on our favorite segments, and they produced live studio tracks based on those excerpts." You can listen to clips of the EP below.

Voices from the Lake will return to NYC for a Bunker party, which doubles as their record release party, on March 14 at Output with labelmate Clay Wilson and Bunker co-founder Bryan Kasenic. There's also sets in the Panther Room by Portable, The Bunker's Mike Servito and Wrecked. Tickets for that show are on sale now. That show is one day after Julio Bashmore plays Output, and like Julio, VFTL are playing Detroit's Movement Festival in May. All tour dates are listed below.

Clay Wilson's release for The Bunker label came out recently, and followed the label's debut release from Leisure Muffin.

All Voices from the Lake dates are listed, with those streams, below...

Voices from the Lake - "Sentiero" (clip)