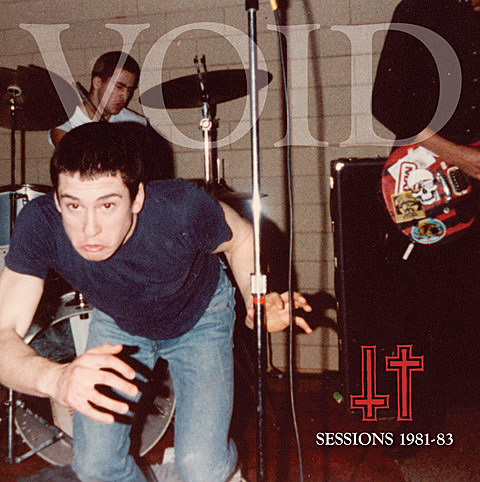 Void were clearly ahead of their time. Although the Columbia, MD band were short-lived and their output was similarly small, Void's negative blueprint were the catalyst for legions to come, signifying one of the first moments when the chaotic urgency of hardcore mixed with metal. Void's split with The Faith is a certified classic (get it if you don't have it already), but the band had little other recorded material available for release save for the Condensed Flesh 7" and a few appearances on comps like the seminal Flex Your Head. Until a recent house-cleaning/excavation at 3819 Beecher St in DC revealed otherwise:

While organizing the Dischord archive, we came across the 4-track of Void's first recording session. This was done with Steve Carr at Hit and Run Studios in November '81 and never released (though there has been at least one bootleg made from a cassette of the original mix). The master tape was nowhere to be found, so the tape was remixed by Ian MacKaye and Don Zientara at Inner Ear earlier this year. It was like digging through a treasure chest! Hearing embryonic versions of what would become Void classics as well as songs that didn't make the cut made it clear just how driven this band was to capture their own sound.

Sessions 1981-83 features the entire Hit and Run session along with the first Inner Ear Demo (including the Flex Your Head cuts and the songs that ended up on the Condensed Flesh 7"), two out-takes from their second Inner Ear session, and a couple of live recordings including one that I think must be the last song they ever played.

Sessions 1981-83 was scheduled for release on 10/24 on Dischord Records but is currently shipping. Check out three versions of "Dehumanized" from November 1981, December 1981, and June 1982 that are all available on the release and are streaming below. Order your copy today.

Void still has one unreleased LP in Potion For Bad Dreams, which the band recorded for Touch N' Go before their demise. The LP is reportedly been shelved indefinitely.

Stream "Dehumanized" times three below, alongside some video.