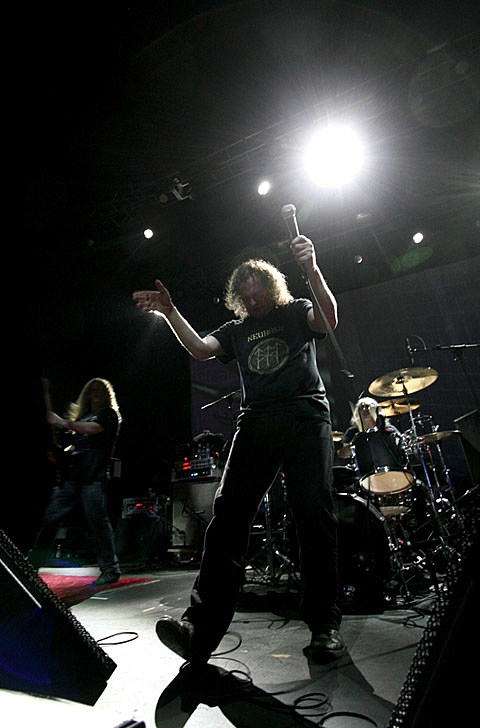 Voivod has been trickling out new tracks from their forthcoming LP Target Earth, which is due on January 21, 2013. First the band dropped "Mechanical Mind" in Youtube form and now comes the release of the title track which first saw the light of day via MetalSucks. Check out both tracks below.

Voivod was handpicked to support Neurosis at their recent album release show in Oakland (pics here). So far no additional announcements from the band regarding an NYC show, BUT additional shows are popping up all around the country including dates in Atlanta, Seattle and Los Angeles. Current tour dates are below... I'd suspect that an NYC show announcement is right around the corner.

In related Neurosis news, the band has announced the departure of visual artist (and A Storm of Light honcho) Josh Graham. Though Graham has never committed a single note to the band during his tenure, he has helped shape the band's visual aesthetic via live projections, art, merchandise, etc. Statements from Graham and the band regarding his departure are below alongside a list of all tour dates.

As of today, after much thought and discussion, visual projections as we have presented them over the last 20 years will no longer be part of Neurosis live shows. We are going to begin the process of reinventing our live presentation. This process will begin at zero, allowing the music to speak for itself and lead us where it may. Whatever form or however long this may take is unknown. This also signals a parting of the ways with our visual artist of the last twelve years, Josh Graham. Josh's tireless work and talent came at a time when we really needed it and carried us gracefully into the video age with original content we couldn't have dreamed of when we were just starting out. Our parting comes from a place of mutual respect, friendship and understanding. We all agree that this is a step Neurosis has to take and are open to working together on specific projects in the future. We wish him success and the best of luck with all of his own musical endeavors and artistic passions.

In the spirit of sound,

For us all, time for change has come. The friendships and body of work that have spawned from our time together will live on as we move forward. It has been an honor and a privilege to work with Neurosis over the last 12 years. As the crossroads are upon us, and we feel that the pinnacle of our collaborative efforts have been reached; we now look toward our individual futures with support and encouragement. Constant reinvention is at the heart and soul of us all, and we will all continue to persevere. Despite the larger picture winding down as we move on in our own directions, we will continue to work together on specific legacy projects including reissues and possibly more if/when the right projects come up.