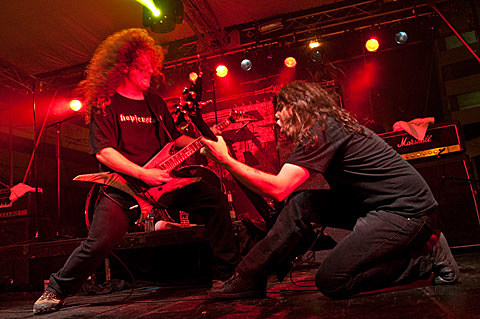 We already knew that Voivod was in charge of curating part of the program, but the ante has been upped with the announcement that the influential Canadian band will play all of their seminal Dimension Hatross LP and that they've invited Yob to play the fest! What's more, Yob will play two complete albums in two different sets at Roadburn 2012, including all of Catharsis and all of The Unreal Never Lived.

The announcement comes with a new round of additions to the lineup including Black Breath, Celeste, Red Fang, Black Cobra, Pelican, Tombs (who just played CMJ), Saviours (who play Saint Vitus on 11/30), Necros Christos, Bongripper, Jesu, La Otracina (who just played Union Pool), Virus, Ulver, Final,Church of Misery, Ancestors, Horisont, Dragged Into Sunlight and Christian Mistress among many others. Current lineup is below alongside some vide, and tickets go on sale 11/26 at 4AM EST.