Scott Kelly of Shrinebuilder at NYU (more by Meghan McInnis) 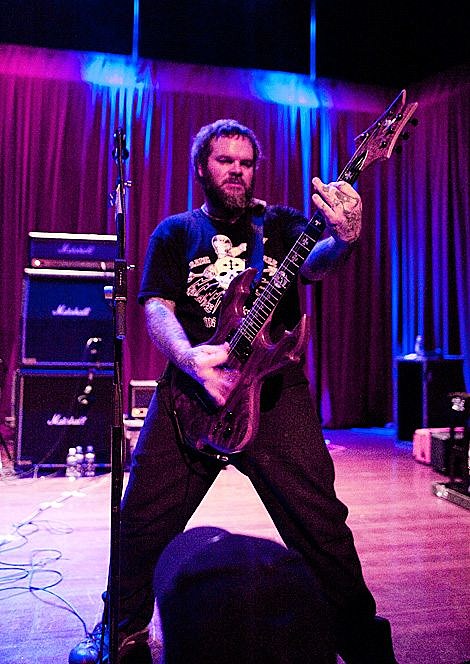 Volcanic ash from Iceland severely disrupted air traffic across Europe for a second day on Friday, causing the cancellation of some 17,000 flights, according to the intergovernmental body that manages European air travel.

Eurocontrol said it expected around 11,000 flights to take place Friday, in contrast to the normal 28,000. The impact will last at least another 24 hours, Eurocontrol said Friday morning.

The ash has spread to parts of northern and eastern Europe and has forced the closure of some of Europe's busiest airports, causing more disruption to worldwide air travel than 9/11. -[CNN]

One unexpected consequence of this volcanic ash situation? Shrinebuilder won't be able to make it to Tilburg today to play the Roadburn Festival. That sucks for The Netherlands, but ends up being great for those of us (also) stuck here! The band was attempting to fly out of NYC, so they've decided to add a last minute show at Europa in Brooklyn TONIGHT (4/16). Tickets will be $10 and are on sale now and at the door. Show is all ages. 7pm. Get stoked!

This is the first example we've heard of the volcano actually causing the addition of a show in the United States. Los Campesinos! couldn't fly which means no show at Purchase tonight, and The Cribs have had to cancel their appearance at Coachella today. Other artists are in jeopardy of missing the west coast fest still too.

Roadburn runs through Sunday. So far Jesu also had to cancel for the same reason. They were replaced by Church of Misery. More about that fest shortly.

Shrinebuilder recently played the Scion Rock Fest in Ohio and before that NYU.