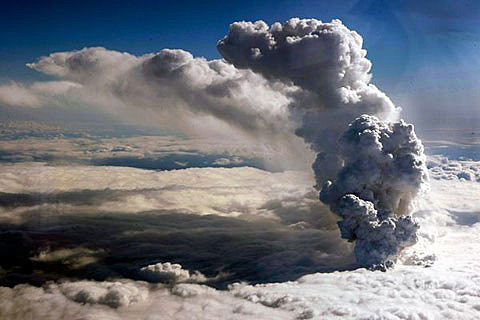 British rockers THE CRIBS have been forced to pull out of California's Coachella music festival this weekend - because all flights out of the U.K. have been grounded due to the ash clouds from a volcanic eruption in Iceland.

The Cribs were due to fly to Los Angeles on Thursday (15Apr10) from Britain, but their plane was cancelled at the last minute and they have no way of flying to California before their scheduled slot on Friday.

They are now hoping festival organisers will allow them to reschedule their gig and are so desperate to appear at Coachella, they're considering taking a ferry across the English Channel and driving hundreds of miles to Amsterdam, Holland to try and catch a flight from there.[Contact Music]

UPDATE: The Cribs have officially cancelled.

BBC reports that: "Representatives for UK artists such as Muse, Gorillaz [performing with Clash members Mick Jones and Paul Simonon], Florence & The Machine, Radiohead's Thom Yorke and Little Boots, all due to play this weekend, have confirmed they're already in the US and unaffected."

We also know that Iceland's Jonsi is already here (and somewhat ironically, major airports in Iceland are still open). The Specials got here early too.

Frightened Rabbit is stuck in the UK but hasn't canceled yet.

The hazardous conditions and airport closures are expected to continue at least into tomorrow.

The Cribs were scheduled to play the fest Friday before She & Him.