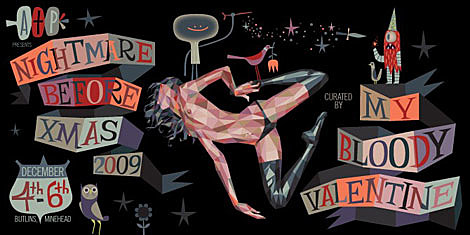 The 11th annual VOODOO EXPERIENCE will once again celebrate music, as well as New Orleans' bohemian culture, arts and cuisine. More than 160 bands will perform in three distinct performance areas--Le Ritual, Le Flambeau and Le Carnival--and eight stages each highlight a unique side of the personality of New Orleans. News re: this year's line-up will be revealed in the coming months.

Three-day weekend passes ($103) and VIP tix are on sale for fest. Its organizers have announced that ticket prices will be all inclusive aka no extra fees, despite being sold through Ticketmaster.

The rapidly approaching Bonnaroo (June 11-14) has added a David Byrne curated stage to its lineup...

We are very excited to announce that David Byrne has assembled a number of performers for the first artist-curated stage! On the evening of Friday, June 12 Byrne, who is performing the "Songs of David Byrne and Brian Eno," will host his recent collaborators Santigold and the Dirty Projectors, singer/songwriter and founder of Righteous Babe Records Ani DiFranco, former Polyphonic Spree member and Beggar's Banquet recording artist St. Vincent and up-and-coming multi-instrumental all-female Norwegian alt/folk band Katzenjammer.

Also in the curating news -- My Bloody Valentine, who curated part of ATP's first festival in NY in 2008, is putting together the lineup for ATP UK's Nightmare Before Christmas 2009. It was mentioned previously that Sonic Youth will be there.

[Nightmare Before Christmas '09] event will take place at Butlins Holiday Resort in Minehead, England from December 4th - 6th, 2009. So far confirmed to join the legendary sonic sculptors are:

And of course, My Bloody Valentine themselves.

Tickets for that are on sale now. If you don't have the cash upfront, there's an option to pay through the ATP "installment scheme," which, though it sounds sketchy, is actually a way to buy part of your ticket now and pay the remainder in July. The poster for the fest is above.

That's somewhat similar to the layaway plan announced by All Points West (Jul 31-Aug 2). Tickets are still on sale for APW. You can also get advance round-trip ferry tickets from Battery Park to the fest for $15. They go up "$20 the week of the show, and $25 if purchased at the ferry box office on the day of the show. Individual tickets must be purchased for each day."

My Bloody Valentine is among the artists playing All Points West this year.

Coachella happened. My Bloody Valentine played. A guy got tased.

The lineup for Lollapalooza (August 7-9) was announced.

In NYC, the Tribeca Film Festival is happening now, through May 3rd.

The lineup for Pitchfork Fest (July 7-9) was updated. That's posted below...