Last week we found out that Cursive, White Rabbits, and M.I.A. were added to the Village Voice Siren Festival (July 21) lineup that already included New York Dolls, We Are Scientists, Matt And Kim, The Black Lips, Dr. Dog, Lavender Diamond, The Detroit Cobras, Elvis Perkins, The Twilight Sad, and The Noisettes.

Today I can tell you that the final unannounced band is in fact: VOXTROT! Friday night I went to see them play (obviously) at their biggest headlining show to date here in NYC.... 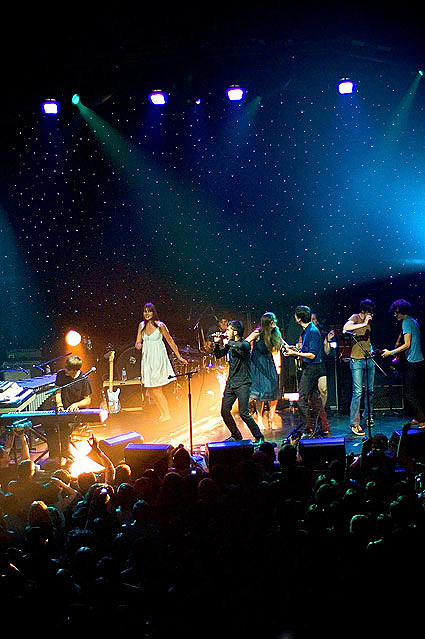 Au Revior Simone opened, and, like the time they opened for Peter Bjorn and John at the same venue, came back to join the headliner on stage...twice - once to sing backup, and another for an all-out on-stage dance party. Unlike past Voxtrot shows (and I've seen a lot of them), this one was further enhanced by the presence of the Tosca String Quartet. Overall, great show - I missed Au Revoir Simone and Favourite Sons though.