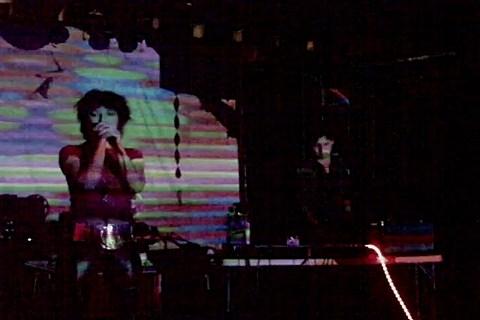 Denton's Vulgar Fashion released their self-titled 10" earlier this year, and they've now just made a video for its single "Golden Showers," a dark, gothy cut that leans towards the industrial-tinged synth pop of the '80s but with swirling layers of psychedelia. The new video is equally dark and psychedelic, and (spoiler alert) contains no visual depictions of the song's title. It premieres in this post and you can check it out below. And if you're noticing those glitches at the beginning and end too, it's either intentional on Vulgar Fashion's part or we're all collectively going insane.

Vulgar Fashion will be headed to NYC to open the previously discussed Ejecta (aka Leanne Macomber of Neon Indian and Joel Ford) show at Glasslands on Saturday (11/23), which also includes Parquet Courts' pals Future Punx and a DJ set from Chairlift's Caroline Polachek. Tickets for that show are still available.

Vulgar Fashion's only other scheduled dates at the moment are in their home state. All of those are listed, along with the new video and a stream of their 10", below...