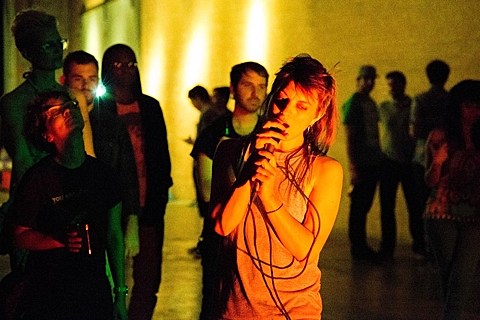 Denton, Texas's dark and trippy synth duo Vulgar Fashion are hitting the road to play a trio of shows on the east coast in April, including NYC at the Acheron on April 26 with Hot Guts, Nearest and Kidaudra. That'll be a good one--prepare for green and blue lights and leather. DJ sets will be provided by Theologian Prime and Ben Abstract, and more info can be found on the show's Facebook page. Tickets are on sale.

The show is the middle date of the three, and on the other two Vulgar Fashion, Nearest, and Kidaudra will be joined by Statiqbloom, Fade Kainer of Batillus's very danceable electronic project. It's a bummer Statiqbloom won't be on the NYC show, but you can catch them at their own NYC show on April 11 at Saint Vitus with The Funeral and The Twilight, Prostate and Blood and Sun. Tickets for that one are available, too.