yeah let's all ignore the VMA's...just keep pretending u wouldn't totally go if u could - Anon 12:32 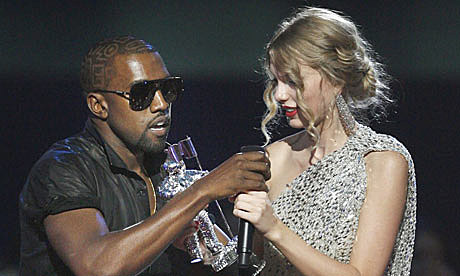 The MTV VMAs were last night. Matt & Kim won the award for Breakthrough Video with their naked-in-Times Square video. Kanye West made a scene. Videos of Kanye (who joins Jay-Z and Rhianna on the new Leno show's debut tonight) (and who played with the same two people at MSG on Friday night), Beyonce, Lady Gaga and more below...

I'm sooooo sorry to taylor swift and her fans and her mom. I spoke to her mother right after and she said the same thing my mother would've said. She is very talented! I like the lyrics about being a cheerleader and she's in the bleachers! ........................ i'm in the wrong for going on stage and taking away from her moment!................ beyonce's video was the best of this decade! I'm sorry to my fans if I let you guys down! I'm sorry to my friends at mtv. I will apologize to taylor 2mrw. welcome to the real world! everybody wanna booooo me but i'm a fan of real pop culture! No disrespect but we watchin' the show at the crib right now cause ... well you know! i'm still happy for taylor! Boooyaaawwww! you are very very talented! I gave my awards to outkast when they deserved it over me... that's what it is!! i'm not crazy yall, i'm just real. Sorry for that! I really feel bad for taylor and i'm sincerely sorry! Much respect!! -Kanye's Blog

"I've seen you do some pretty shitty things, but you just keep amazing me with your tactless, asshole ways. It's absolutely fascinating how much I don't like you. I like everyone. I even like my asshole ex that cheated on me over you... which is pretty odd since I don't even personally know you," Clarkson wrote on her IAmKelly blog. "The best part of this evening is that you weren't even up for THIS award and yet you still have a problem with the outcome. Is winning a moon man that much of a life goal?? You can have mine if it will shut you up. Is it that important, really??" Clarkson was nominated in the Best Female Video category last night, but added that she was "excited" when Swift was named the winner.

Pink, who also lost in the Best Female Video category, reportedly had to be restrained by security from approaching West after his rant. Unable to lash out in person, Pink instead turned to her Twitter to attack Kanye, MTV reports. "Kanye West is the biggest piece of shit on earth. Quote me," Pink wrote. "My heart goes out to Taylor Swift. She is a sweet and talented girl and deserved her moment."

American Idol runner-up Adam Lambert wrote on his Twitter, "Kanye needs to chill. He freaks out every year. It ain't that deep man," while Danny Gokey simply used Kanye's words against him, writing "How could you be so heartless?" Katy Perry was less subtle in her tweet, posting "Fuck U Kanye. It's like u stepped on a kitten." Kings of Leon's Nathan Followill said, "We lost damnit. Maybe next year. At least we got to see the worst haircut since 1984 try to steal the spotlight from lovely Taylor Swift." For more of the Kanye bashfest, check out ONTD's rundown of celeb tweets. [Rolling Stone]