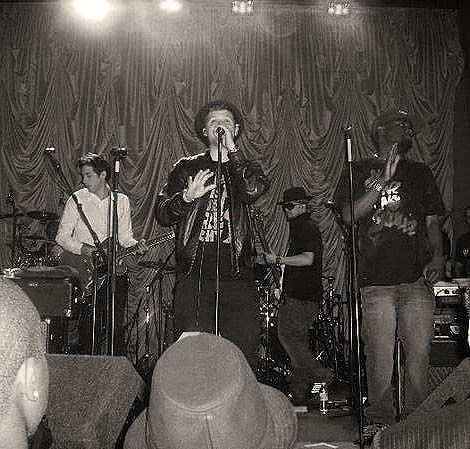 Allido Records, named after one of my favorite Stevie Wonder songs, is the label co-owned by Mr. EVR aka potential Lohan In-Law Mark Ronson (sorry for getting all Perez-y). Mark Ronson will rep Allido when he appears as house DJ during the Allido CMJ showcase at SOB's on Oct 21st. Tickets are on sale.

The Allido Showcase will be headlined by Wale (pronounced wah-lay), who has appeared in NYC with Ronson before, and who recently hopped on a new remix of M.I.A.'s "Boyz" that some say is better than the Jay-Z remix that was released at the same time. Both are available for download above... you be the judge. Wale doesn't have an actual album to his name yet (he's a mixtape dude), but look for his debut to drop in Spring 2009 and feature Travis Barker (recently released from an LA burn center), Mark Ronson (no doy), 9th Wonder, Just Blaze, and Pharrell.

On January 25, 2008, Wale and Mark Ronson, on Ronson's East Village Radio show, hinted that Wale was in the process of signing with Jimmy Iovine at Interscope Records and On March 12, he announced on 93.9 WKYS that he had signed with Interscope. [Wikipedia]

Speaking of 9th, also keep a look out for a Wale/9th Wonder collabo mixtape called Back To The Feature "up next", according to a recent interview in Giant Magazine. For now though, dig on "The Mixtape About Nothing" available for download at his blog.

Rhymefest of I-co-wrote-Kanye-West's-"Jesus Walks"-fame will also be in the (SOB's) house (check out the free Jacko-themed mixtape from earlier this year available above), as well as The Rumble Strips and Daniel Merriweather (not to be confused with Dan The Automator aka Nathaniel Merriweather of Handsome Boy Modeling School fame). Daniel was also at that Webster Hall show Ronson played in October last year.

In other semi-related news, Perez Hilton is announcing his full CMJ lineup on Monday, Pharell and M.I.A. recently got together, Jay-Z inspired a bunch of kids to search out Daptone's Menehan Street Band, and the BrooklynVegan CMJ showcase, happening the same night as Ronson's, is getting close to being sold out. Also that night: The Cool Kids & The Carps.

Wale videos and tour dates below...