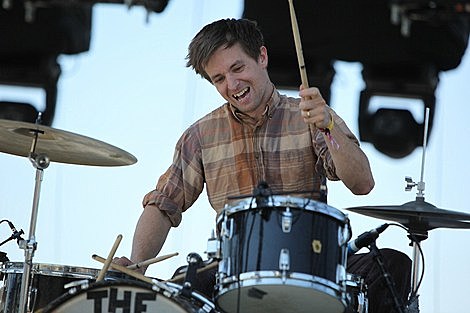 It Came From Brooklyn inaugurates a new series of live music concerts in the [Guggenheim] rotunda. The program will showcase ten bands over the course of five Friday evenings commencing mid-August, with each night featuring a music set by two bands, interspersed with a short reading by a Brooklyn-based writer or actor. The series, taking place within the rotunda, will cast a spotlight on Brooklyn's musical renaissance by providing a platform for a new crop of musicians. The line-up includes bands such as The Walkmen and High Places.

In fact, High Places and The Walkmen will play the same It Came From Brooklyn show, its inaugural night on Friday, August 14th. The Gugg website also NO LONGER reports that Grizzly Bear will be one of the series' acts. Stay tuned for more announcements.

UPDATE: We are told Grizzly Bear is not confirmed for this. They have been removed from the museum's website....

The museum's Frank Lloyd Wright-designed rotunda should add some interesting reverb effects to Grizzly Bear's harmony-heavy tunes. Especially good news if you missed the last three Grizzly Bear NYC shows, when they played May 28th and 29th at Town Hall and May 31st at MHOW.

Grizzly Bear collaborator Nico Muhly, who premiered a "scent opera" at the Gugg on May 31st and Jun 1st, recently defended the band's Town Hall show (at which he played keys) against the not-so-nice Times review...

Times: But wow, these songs are precious, and they occasionally came spangled with extras that made them even more so. The chorus was one of those elements, sorry to say.

Nico: Oh snap! Apology accepted. Now, I have major objections to the word "precious." It tends to be borderline homophobic in its coded usage, first of all, but second of all, it's a derogatory adjective with no alternative. It's reviewspeak. What I mean is: if you say, "that's ugly" somebody else can say, "no, it's beautiful." If you say, "it's over-stuffed" somebody can say, "really, I thought it was pretty thin." So the problem with a word like precious is that the scale of adjectives with "precious" on it belongs solely to the reviewer and is just a way of being mean. Case in point: this whole nonsense about Sufjan Stevens's's BQE Thing. Words like fey, twee, and precious have become these little nuggets of coded disdain, but they are really just useless self-congratulatory gestures on the part of the reviewer. What is the opposite of twee? Muscular? It all reminds me of the insane misogynist critiques of Jane Austen's novels. I guess the place for a word like that would be in a larger piece about the music world -- there was an enormous brouhaha in Iceland about the so-called Krútt scene. Krútt is probably the closest approximation in Icelandic of "precious" -- it refers to Múm, kind of Sigur Rós, and a lot of imitators: it denotes little bells, reversed glockenspiels, fairytale vocals, cutely-outfitted brass bands. Now, all of that is just a description and not derogatory; my iPod overflows with this shit. Anyway, to go to a concert of that kind of music and be like, "it's precious," all you're doing is going to a Chinese restaurant and being like, "wow, they were serving mad chinese food up in there!"

The full nearly-point-by-point analysis is up at his blog. David Byrne also recently took on a NY Times review on his blog.

All Walkmen, High Places and Grizzly Bear tour dates below...