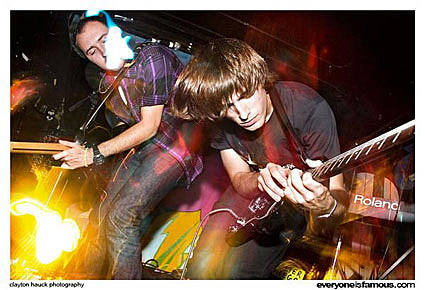 I (david bruno) first became aware of Chicago's Walter Meego (band, not dude) a few summers back when their infectious "Romantic" track was making the rounds across the interworld. Their quirky, electronic pop feels not dissimilair to Hot Chip, but starting with more of a rock angle. Music.for-Robots Mark said, "They're really doing some interesting stuff, blending the dark electronic with the Chicago post rock. It's the type of sound that makes so much sense in today's current scene, but rarely executed this well."

I reached out to them and brought them to do a DJ set here in New York. Since then, they've played live here many times and released singles for "Romantic" and "Hollywood," got a Switch and Sinden remix, toured the country with VHS or Beta, and gone through some line-up changes. All the while, they've recorded a full length album and got signed to Almost Gold Recordings (home to Peter Bjorn & John and Calvin Harris). Their album is due out early next year, but the boys are romping through CMJ this week (including a set last night opening for UNKLE at Webster Hall). Saturday night (Oct 20) they're playing our DANCE party on Saturday night. Their full schedule is below. Get to 205 early on Saturday night to catch Walter Meego and Thunderheist!

Speaking of Walter Meego's line-up changes: one of the founding members of the band, Jarrett Spiegel left to delve into his own electronic production. Still based in Chicago, Jarrett together with San rancisco-based Salva, record as Popstatic. Jarrett is in town this week to DJ TODAY (OCT 19) at the Brooklyn Vegan day party at R Bar and at DANCE at 205 on Saturday night. For more on Popstatic, check out this previous feature on my site.