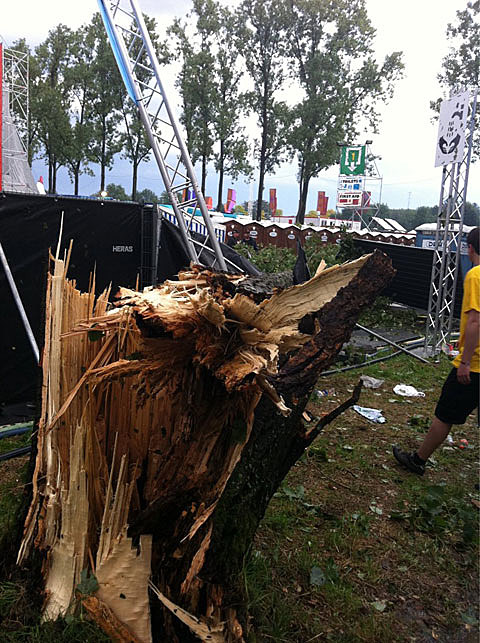 I was at Pukkelpop festival with Rival Schools earlier this week, still trying to make sense of it. The storm hit about twenty minutes before we were supposed to play.

Strange to say, knowing what we know now but I was having fun watching the storm, by the time it really started coming down I was safe in the backstage area. As violent as the storm was it only slightly crossed my mind that someone would get hurt.

I guess having seen that stage collapse in Indiana the week before it just seemed to weird to have another tragedy like that happen in the same week.

I was listening to Skunk Anansie's set as the hail arrived. As they were leading up a huge creshendo/finale to their set the motherload of lightning came down on the festival in perfect time. I wanted to be in the audience at that moment and not backstage, it was an awesome sound.

The storm raged on for about a half hour after that at full intensity, hale and everything. When it finally slowed down people started to show up backstage with news, at first it was cool stories of how crazy it was and how there were trees down and that it didn't look like we'd get to play.

After that we heard that a couple of people had died and then it wasn't so fun, started to feel a little guilty that it had been fun actually. The death number went up to 6 and then back to two and when I heard the next day I think it was seven.

It was a very strange beginning to the tour for us, I was happy to be safe and with my friends but I felt bad knowing how some people's lives would never be the same. Helped me to understand why insurance companies use the expression "An act of God". My heart goes out to the families of the victims.

Walter tours the US in September with the Walter Schreifels Band and then in October with Rival Schools.