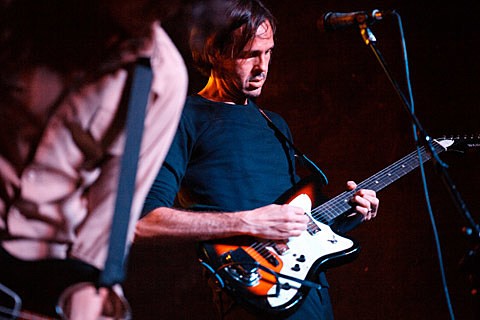 Walter Schreifels has to be one of the most consistently busy musicians in rock. He was a member of a few legendary bands, including but not limited to Gorilla Biscuits and Quicksand, and those bands have played live as recently as November's Fun Fun Fun Fest and New Year's Eve in NYC, respectively. He's also got an ongoing solo career and two recently-formed bands: Vanishing Life (with members of Trail of Dead) and The Dead Heavens (with former members of Youth of Today, White Zombie and Cults). Vanishing Life put out a single last fall, and now we're finally getting a studio-recorded taste of Dead Heavens.

They've already played live a few times, including a CMJ show (pics) (co-presented by BrooklynVegan) and a Shea show in November, and now they've announced that they'll release the "History In My Hands" b/w "36 Chambers" 7″ on February 17 via Thrill Me (pre-order). Walter has said this band is inspired by Cream and Black Sabbath, and there's definitely some of Clapton's Cream-era wah guitar throughout the song, but it's a bit lighter than that description may make you think. Check it out below, via Stereogum.

The Dead Heavens have also announced a NYC residency happening in February at Saint Vitus. Here's the schedule:

Philly indie rockers Cayetana just played a BV-presented NYC show and covered New Order over the weekend (pictures and video), and Without count Bobby Drake of The Hold Steady as a member.