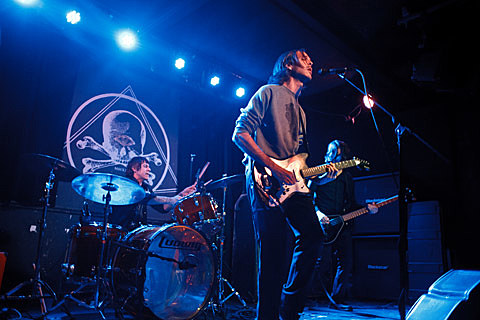 Walter Schreifels' garage/psych band Dead Heavens are releasing a new two-song 7" on February 12 via Thrill Me Records (pre-order). The b-side is their cover of Can's "I'm So Green" that came out last spring, and the a-side is the newer single "Feel Low." The new song is up that same '60s-inspired alley as the other stuff we've heard from this band. Check it out below.

Dead Heavens are also going on a short tour in February, including a NYC show on February 4 at Grand Victory. Tickets for that one are on sale now. All dates are listed below.

In related news, Walter's Gorilla Biscuits bandmates Sammy Siegler and Arthur Smilios are playing in the new band World Be Free, fronted by Terror's Scott Vogel, featuring a member of Strife, and more. Their upcoming album The Anti-Circle, due February 5 via Revelation, pretty much sounds like classic Gorilla Biscuits/Youth of Today/etc, and they recently dropped a new song from it. Check out the video for "Shake the Ghost" below.

World Be Free's tour hits NYC on February 21 at Saint Vitus with Manipulate. Tickets are on sale now. Most other dates on the tour are with Judge.