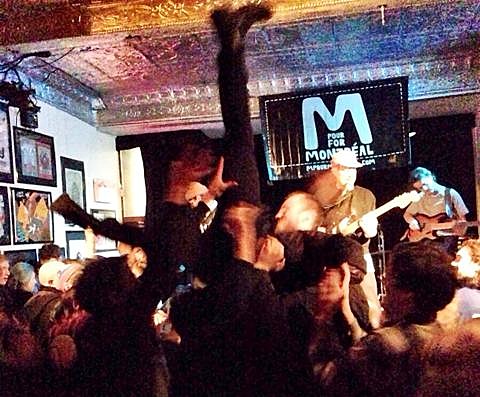 The eighth annual M for Montreal is currently underway in Montreal, having begun yesterday (11/20). After the first night's official music showcase ended, there was an afterparty at Casa which featured a completely off-the-rails set by Walter TV which basically is Mac DeMarco and his band in another configuration, with Pierce McGarry on vocals and guitar. This was a party crowd and I'm pretty sure their was no time during their wild set where there wasn't someone crowd surfing or someone about to stage dive. The night ended with a sing-along-cover of Jane's Addiction's "Jane Says." Check out our full review of M for Montreal day 1.

Walter TV are set to release a new album called BLESSED at some point in the near future, which will follow 2012's APPETITE cassette. They just made a video for "Paranormal Witness" off of the upcoming album, which you can watch, along with a stream of APPETITE and a video from that release, below...