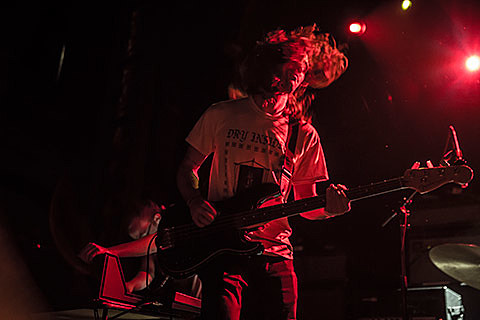 LA's psych destroyers Wand are back with a second album, Golem, less than a year after their debut, Ganglian Reef. This new one will be out March 17 via In the Red. Where their debut was deep in analog synths, Golem sounds a little more like their live show: loud. The first single, "Self Hypnosis In 3 Days," can be streamed below.

Around the release of the album, Wand will be heading out on an extensive North American tour that includes a visit to SXSW and two NYC shows: Baby's All Right on March 28 with Babes and Mercury Lounge on Sun. 3/29. Tickets for Baby's go on sale Friday (1/9) at noon and tix for Mercury Lounge go on sale January 16 with an AmEx presale starting January 14.

They were terrific when I caught them at Death by Audio last September during their tour with Ty Segall. All dates are listed, along with the new song stream, below...