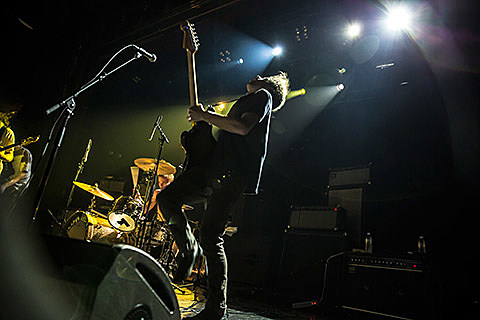 Wand are offering up another dose of their forthcoming album, Golem which is out March 17 via In the Red. Set to a martial, stomping beat and thick analogue synth drone, "Reaper Invert" is a superior slab of psych. Says guitarist Cory Hanson:

We wanted to make a song like if 'Fat of the Land' was slowed down to 33. I can remember recording it...a little bit. Adding a synth that mimicked the sound of rustling leaves in the left ear. Chris said, 'that's some artsy shit.' We were destroying his perfectly balanced mix, which was pretty exciting. Daniel laid down some nasty spaghetti-western style guitar which I was stoked on. For this song we tuned the low E string to C because it makes the guitars sound trashy, like KoRn or something. Maybe we should get 7 strings? Someday (sigh).

Listen to "Reaper Invert" below and Golem is out March on In the Red.

It won't be long till Wand are back in NYC when their tour with Babes stops for two shows: Baby's All Right on March 28 with Scully (tickets) and Mercury Lounge on March 29 with Honey (tickets). They've added a lot more tour dates since we last posted, and all are listed below...