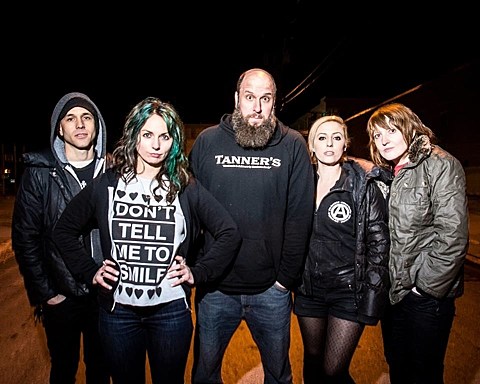 War On Women are a feminist hardcore band from Baltimore whose debut EP came out in 2012 and paired metallic punk with angry, sarcastic, unsubtle and very effective takedowns of sexism. They recently signed to trusty hardcore label Bridge 9, and are planning to release their debut LP on that label in 2015 which they recently finished recording with Jawbox's J Robbins (whose new band Moral Mazes are also on Bridge 9). No music from the new album has come out yet, but you can stream their 2012 EP in full below.

War On Women recently wrapped up a tour supporting Propagandhi and they'll hit the road again to open for their B9 labelmates Boysetsfire on that band's 20th anniversary tour, which will see BSF playing 2000's After the Eulogy in full. It hasn't been announced yet who's opening the Long Island, NJ and MA shows, but we know that both Philly and Brooklyn will be opened by War On Women, Avail singer Tim Barry and the Hot Water Music/Small Brown Bike-related UnWed, which is a great bill all around. The Brooklyn show happens October 26 at Saint Vitus, and tickets are still available.

Stay tuned for openers on the other three Boysetsfire dates. Meanwhile, the full tour schedule, with the stream of the War on Women EP, is below...