The Pains of Being Pure at Heart (TPOBPAH) 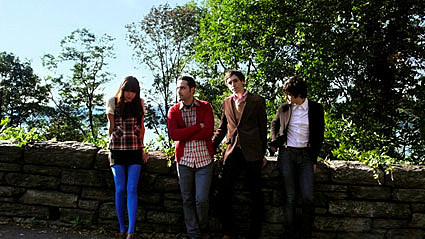 Was last summer this crammed with stuff to do? It seems like there have been very few nights of easy living, what with all these worthy shows. And Summer may have official started last weekend, but it's this one that feels like it, with the return of the Sunday McCarren Pool parties, and Celebrate Brooklyn shows in Prospect Park and the Seaport. Too many shows to all throw, willy-nilly, into one post so here are a few things I'm excited about.

If you didn't get enough jangly guitars and winsome melodies at the NYC Popfest two weeks ago (or you missed it and wished you hadn't), tonight at Cake Shop finds monthly UK party Twee as F**k coming to NYC for the first time. Headlining the show are The Pains of Being Pure at Heart, who were really great at Popfest, and should be right at home tonight (June 26) at what the band told L Magazine was their favorite New York venue.

Also on the Twee as F**k bill are two bands from Cleveland, Bears and Afternoon Naps. I'm particularly looking forward to Bears, who I would put somewhere between The Strawberry Alarm Clock and The Boy Least Likely To. Their 2006 debut is really good and they've got a song on the two volume, download-only Summer's Here compilation that Norwegian blog Eardrums offered up earlier this week.

They are also promising free cupcakes. Fun starts at 9PM. Bears are also playing Death by Audio on Friday with Pwrfl Power and Tickley Feather. All Bears dates below. 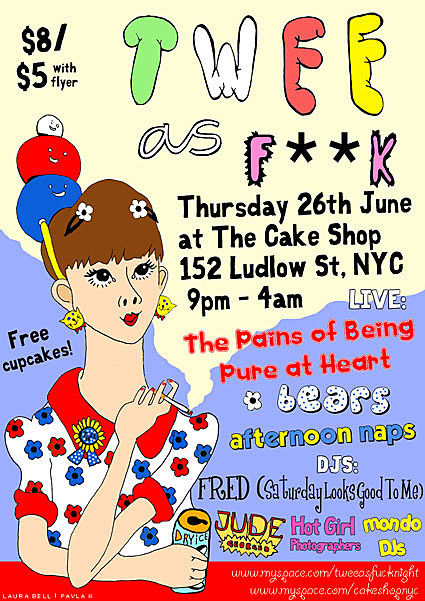 Friday (June 27)is the Battle of the Free Shows. Some of you may be heading to the Prospect Park bandshell for Cold War Kids, Elvis Perkins, and Sam Champion (the latter of whom's upcoming album, Heavenly Bender is quite good), but I'll be heading way downtown for the River to River Festival's Seaport Music series. You might be able to hear it from midtown though. Noiseniks A Place to Bury Strangers are headlining. The only thing that ever seems to get mentioned about APTBS is how f-ing loud they are, but there's really catchy songs under all that squall (and behind the smoke machines).

It's an interesting trio of bands at the Seaport actually. Canadian garage soul royalty King Khan & the Shrines will be making their American debut on Friday. King Khan has been through town before but never in this incarnation which will number around 14 onstage. As you may have read, Vice just put out The Supreme Genius of... -- a rockin' overview of Khan's many permutations over the years. They put on quite a show -- this should be good. More King Khan tour dates below.

Opening are Black Acid, which is the new band from Richard Fearless, who still works under the Death in Vegas moniker. Black Acid's psychedelic blues isn't all that far off from DiV's grungy sound, just more stripped-down and no electronics. A Place to Bury Strangers' Oliver Ackerman was in the initial Black Acid lineup, so don't be surprised if he makes a guest appearance Friday.

If that's not enough psychedelic rock for you, LA's Warlocks are in town who are on tour with Austin's like-minded Black Angels. Warlock's frontman Bobby Hecksher did time in the Brian Jonestown Massacre (who are playing Terminal 5 soon) and they don't stray too far from that sort of sound. I've seen them a few times over the years, and if you like that sort of thing, they do it really well -- and also put on a good light show. The two bands will be at Southpaw on Saturday, but Friday night the Warlocks have a late show at Mercury Lounge with NYC's Blacklist, who are recommended if you liked The Bolshoi or early Cult or anything else on Beggars Banquet in the '80s.

Blacklist - Language of the Living Dead