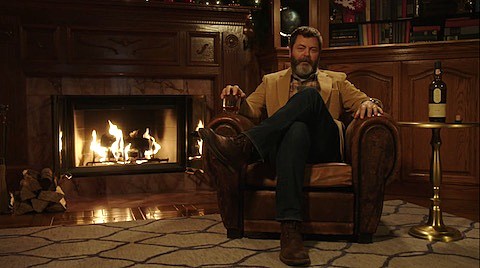 The TV "yule log" -- a live broadcast of a fireplace -- is a holiday tradition that started here in NYC in 1966 on station WPIX. Others have copied the concept since but leave it to Nick Offerman to take it to new, Offermanian heights. Ostensibly an ad for Lagavulin, the Nick Offerman 'Yule Log' is 45 minutes of the comedian sitting in a big leather chair, by a fire, drinking scotch whiskey. Short of him eating a giant porterhouse while doing so, this is about as Nick Offerman as it gets.

Offerman is also in the new season of FX's Fargo, which is really, really good.